I have written about various efforts to train folks for better jobs, which I think is the most important economic development strategy. That’s why I have written about, for example, the myFutureNC drive to get hundreds of thousands more North Carolinians more skills by 2030.

One program that has achieved success is the Furniture Academy at Catawba Valley Community College. In six years, it has trained hundreds of students for – good-paying  and some great-paying – jobs at companies that make upholstered chairs and sofas and the like.

It is remarkable what the academy has done. But it is also useful to know how it came to be. There are lots of good ideas floating around, but it takes really hard work to make anything happen. I always want to know who did what, and how.

That led me to Bill McBrayer, an executive for a furniture company in Hickory, Lexington Home Brands.  He helped get the academy started, is still its biggest champion, and knows the back story. 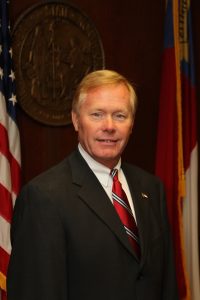 The furniture industry has had a very specific skilled labor shortage. Which may surprise some, because a lot of the industry’s jobs went overseas years ago. But those were primarily jobs in factories that made wood furniture – tables, bookcases, cabinets – with long production runs that could be manufactured in factories with lots of machinery and low-cost labor.  Nearly 90% of wood furniture is now imported, according to government trade numbers.

But U.S. upholstered furniture manufacturers are hanging in there. Slightly less than half of upholstered sales in the U.S. are imports. And companies that make custom upholstered furniture, like the ones in the Catawba Valley, have an even stronger position.  The “vast majority” of imported upholstery is not custom, said Pat Bowling, vice president of communications for the High Point-based American Home Furnishings Alliance.  “One thing you cannot do cheaper overseas is to produce one of something.”

But a decade ago, in the wake of job losses in the furniture industry in general, the custom upholsterers were having trouble filling positions. Parents were steering their kids away from what they saw as an industry in decline.  And upholstery workers were aging.

Conversations started in 2012 among Hickory area furniture companies, regional state employment folks, and community college representatives about how to get the word out that there were still good jobs to be had in the furniture industry. Meetings continued monthly, about possible partnerships with area schools, skills needed, and revamping the community college furniture program. The conversations were happening throughout the four Western North Carolina counties around Hickory – Catawba, Caldwell, Burke and Alexander – known locally as the Unifour.

“Lexington [Home Brands], where I work, is located just over the Catawba line in Burke County,” says McBrayer. “I got a call from Burke County saying they were having a meeting of some upholstery plants, would I be interested in coming.  So I did.  Well, they were discussing the same [thing] we’d been talking [about] in Catawba County for about a year.”

McBrayer called the president of Catawba Valley Community College, Garrett Hinshaw, and suggested a meeting of furniture industry leaders at the college and maybe area community colleges could send some vice presidents.

“And he says, ‘Well, how about if I get the presidents there? That way, whatever we say, we can make it happen.’ I said, even better.”

And so there was a meeting in the board room at CVCC, and the Furniture Academy was born. It would be an intensive, hands-on immersion in furniture fundamentals, sewing, cutting, and upholstering, meeting at night, taught by veteran furniture workers.

The goal was to grow the workforce. “We were in desperate need of skilled workers. So it wasn’t much of an arm-twisting sales job to get them to come together and talk about it,” says McBrayer.

Besides Lexington, the four other original Hickory-area companies that joined together to launch the academy were Century Furniture, Lee Industries, Sherrill Furniture, and Vanguard Furniture. Another key player was Ronne Grantham, who was, at the time, a manager in the NCWorks Career Center in Hickory and is now regional operations director of the Southwest Prosperity Zone for the Division of Workforce Solutions.

“We had been hearing from job-seekers and others in the community that furniture was ‘dead’ in Catawba County,” says Grantham.  “We knew this was not true, as we had many thriving furniture companies that were listing jobs with [NCWorks] and hiring workers.”

The academy opened in 2014 on the CVCC campus.  Two years later, it moved to a 38,000-square foot building about three miles away.  To date, the Catawba academy has had 286 graduates and a similar program in Alexander County, which opened in 2016, has graduated 119. All graduates have been offered jobs, says Lori Miller, director of furniture workforce development at CVCC.

That last part, about graduates getting jobs, is one key to the success of any program. But there are other factors, for any industry-specific training academy you may be thinking about. And people have been thinking about it, which is why there is now a Catawba Valley Manufacturing Academy and a Construction Careers Academy at the college

McBrayer, who is now vice chair of the state community colleges board, has talked to”umpteen” groups around the state that are interested in the academy concept. He cites five needed elements:

1. Any group of companies needs to partner with the local community college, which understands the job skills education process. Presidents of the 58 community colleges can make things happen quickly, says McBrayer.

2. “Get the industry that you’re working with in one room and talk about what your goal is.”  McBrayer sent out two dozen invitations to furniture CEOS in the Unifour and Hinshaw helped him get the college presidents in the region to come. And things got rolling. The five founding companies are “like the advisory board.”

3. Get vendors involved. “The people that sell you all the material that goes into whatever you’re making,” he says. “We reached out to the supply chain and brought them into the fold.” And if you’re a company working with the community college to get a furniture academy started, you might be able to get a supplier to donate pneumatic staple guns. You might be able to get a supplier to help you get a high-tech, computer-operated automated fabric-cutting machine donated, like the sweet Gerbercutter Z1 from Gerber Technology. (McBrayer: “It took a little begging.”)  Vendors are apt to be more responsive to companies they do a lot of business with than someone at the community college calling. “Everything we get is either free or at a discounted rate,” says McBrayer.

4. “You have to have a champion,” said McBrayer.  Someone who is willing to be the public face of the project and can talk it up to parents at PTA meetings. The word needs to get out. In the case of the Furniture Academy, that was McBrayer, who is well-known in the area for his civic involvement.

5. “At the end of the day, the student has to have a job to go to. Because that’s the whole purpose of this thing. And in the beginning, we told them if you get a certificate, we’ll hire you.

With the investment of less than a year and total tuition for all the classes of around $600 – and some companies will reimburse part of that – graduates can start a career that can pay well. They can master the Gerber machine; they can learn to sew the jigsaw puzzle of fabric pieces cut by the machine. (Sewing is incredibly important when making upholstered custom furniture with stripes and patterns that all have to match up from top to bottom, on the sides. It’s called the “flow match,” and if you mess it up, nothing else matters.) They learn how to upholster – to attach the sewn fabric to the wooden frame – and to install springs.

Look at your living room sofa and imagine building it from scratch. If you get good at this and develop some speed, in a few years it’s a good living.

McBrayer likes to talk about a fellow who was hired as a temp about 5 years ago at $9 an hour, unloading containers, who constantly expressed a desire to learn new skills. “He was just like a sponge.”

He wanted to become an upholsterer, and now he is. His compensation is entirely production-based; he makes what he upholsters. It’s hard work. But McBrayer estimates the employee now probably earns $79,000 annually, at age 27.

“That’s good money. I go to PTAs and talk about that, and the parents are like, ‘Sign me up. Forget about my kid. Sign me up.’”