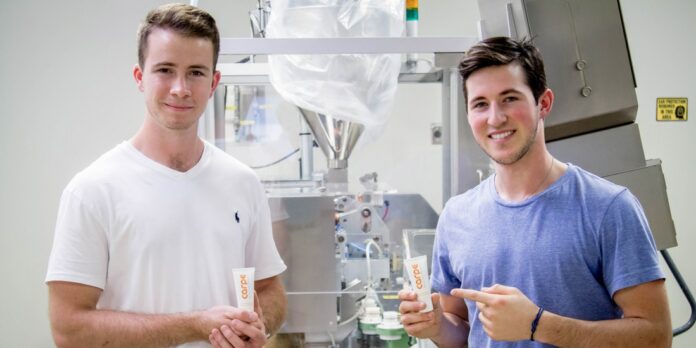 Carpe develops a lotion to stop sweaty hands and feet

Kasper Kubica, left, and David Spratte were part of the Robertson Scholars Leadership Program at UNC Chapel Hill and Duke University. The dual-campus program was started in 2000 by hedge-fund titan and Salisbury native Julian Robertson Jr. and his late wife, Josie.

As college sophomores, Carpe co-founders David Spratte and Kasper Kubica didn’t appear to have much in common. Spratte, who is from Atlanta, was studying health policy and management with a minor in chemistry at UNC Chapel Hill. Kubica, from Salt Lake City, was a physics and computer science major at Duke University.

The two met as roommates the summer after freshman year while interns in New Orleans and discovered they both suffered from hyperhidrosis, a condition that causes excessive sweating, often in the hands and feet.

Upon returning to school in the fall, they enlisted fellow UNC student Chris Jenks to help develop a formula for an antiperspirant lotion to tackle the problem. They launched Carpe in July 2015, selling the lotion online.

In May, one year after Spratte and Kubica graduated from their respective colleges — and following several months cajoling a CVS buyer — Carpe lotion hit shelves in 8,000 drugstores across the U.S. The company completed a $2.3 million financing in April and now employs 10 full-time workers at its Chapel Hill office.

Spratte got the idea for Carpe when classmates at his Catholic high school had to hold hands during Mass. He noticed several were attempting to dry their sweaty hands on pants, programs and chairs.

“People with excessive sweating have to hide it. They are always holding something so they don’t have to shake hands, and they avoid a lot of social situations,” Spratte says. “It’s a really big problem that has a huge impact on quality of life.”

A pitch contest at UNC’s business school landed them an initial $100,000 from Bootstrap Advisors, an investment company started by three Duke graduates, including Jay Mebane, co-founder of the successful dog-calming Thundershirt brand.

Estimates show as much as 5% of the global population suffers from hyperhidrosis. Many available treatments are costly or time-consuming, including Botox injections, prescription medications and even surgery to remove sweat glands, according to the American Academy of Dermatologists. A 1.35-ounce tube of Carpe lotion sells for $14.95.

Seeking the right mentors has been key to the company’s early success, Spratte says. “Knowing what we don’t know and knowing the questions to ask is an extremely important part of our job.”

Spratte, 24, handles sales and marketing and investor relations, while Kubica, 23, focuses on operations, technology and finance. A contract manufacturer makes the lotion, and a third-party logistics provider handles distribution.

The name is derived from the Latin phrase “carpe diem,” meaning “seize the day.”

“It’s going to give you the confidence to go into the meeting, presentation or whatever you’re doing and really perform at your best and feel good about yourself,” Spratte says.

CHAPEL HILL — Bill Roper will step down as CEO of UNC Health Care and dean of the UNC School of Medicine in 2019. UNC will conduct a national search for his successor. Roper turns 70 this summer.

DURHAM — Mike McDevitt is retiring as chief financial officer of Cree. McDevitt joined the LED lighting maker in 2002 and became CFO in 2012. His successor has not been named.