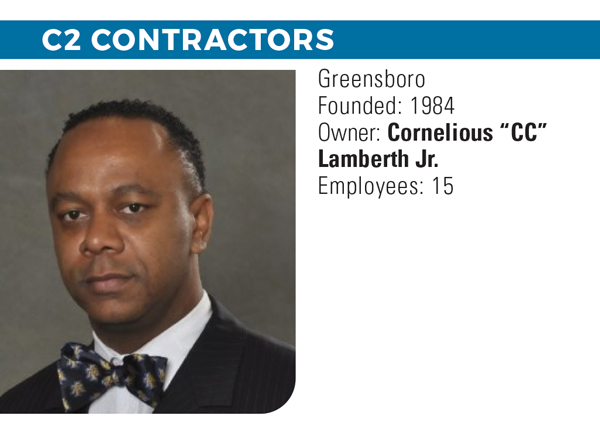 Cornelious Lamberth Jr.’s C2 Contractors operates on a simple principle. Hold us accountable, he says, “based on the quality of our work and the results we achieve.”

For more than 30 years, that’s worked for Lamberth, who goes by his initials, “CC.” While building his computer-cabling company, formally recognized by the state as a historically underutilized business, he’s set aside time to crusade for other minority enterprises and his alma mater, N.C. Agricultural and Technical State University. He’s a 1989 graduate with a degree in electronics and computer technology.

C2’s bread and butter is building electronic networks that link computer servers and workstations, voice-over-internet systems, and other technology.

The company has a general-contracting branch that has partnered with British contractor Balfour Beatty and Greensboro-based WeaverCooke in design-build contracts, demolition and other services. It worked with Balfour Beatty on N.C. A&T’s 175,000-square-foot student union building, which opened in 2018 at the Greensboro campus.

Lamberth has also served as a member of the executive board of the Greensboro Chamber and chair of the local NAACP’s economic-development tech program. He’s on the advisory board of his alma mater’s school of technology. Lamberth says membership in mainstream organizations like the chamber enables companies like his to overcome a common barrier to growth — intentionally or not, potential clients tend to do business within their own circles.

More so than race, he adds, “it’s really all about business.”