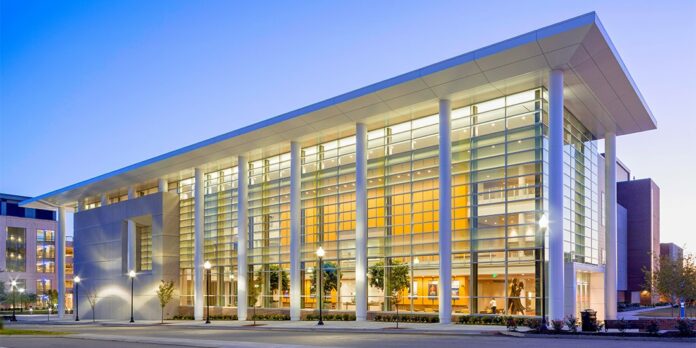 From office high-rises to a brewery overlooking the French Broad River, the state’s most compelling new buildings run the gamut. The third annual Building North Carolina awards, selected from projects completed between July 1, 2015, and June 30, 2016, showcase commercial structures based on their design, innovation and community impact. Wilmington’s newest arts venue is not only New Hanover County’s largest theater, it’s a giant classroom for students at Cape Fear Community College. In addition to a 1,500-seat auditorium, the theater houses the college’s music, drama and art classrooms and faculty offices, rooms that previously had been scattered across the downtown campus. The center also has a smaller 108-seat theater and sculpture, dance and music studios, many with views of the Cape Fear River, plus a darkroom and courtyard for performances, exhibits or receptions. The center, named for members of the family behind the former Wilsons supermarket chain, surpasses UNC Wilmington’s Kenan Auditorium (1,000 seats), Minnie Evans Arts Center (955) and historic Thalian Hall (646). A building blitz by the U.S. Department of Veterans Affairs has brought
1 million square feet of new health care space to North Carolina, including three new “clinics” in Charlotte, Fayetteville and Kernersville. The clinics offer operating rooms, imaging spaces and services ranging from cardiology to eye exams. While they look like hospitals from the outside, they do not offer inpatient beds. For many veterans, a visit to one of the centers avoids a longer trip to VA hospitals in Asheville, Durham, Fayetteville or Salisbury. North Carolina has more than 736,000 veterans, eighth most in the U.S. and 7% of the state’s population. The Eastern Band of Cherokee Indians opened its second casino last fall. Though Cherokee Valley is smaller than its big sister in Cherokee, it’s already drawing an average of about 3,000 visitors a day. Many are traveling across state lines, exactly what the tribe hoped for when it opened the casino on the western edge of the state, a fairly easy drive from Atlanta to the south and Chattanooga to the west. Georgia, Tennessee and South Carolina don’t permit commercial, tribal, pari-mutuel or racetrack betting. The Murphy casino has 50,000 square feet of gaming space along with a 300-room, seven-story hotel tower. Most colleges keep the classrooms separate from the heating and cooling equipment. Wake Tech combined them in Regional Energy Plant 2, where the utilitarian cooling towers, boilers and chillers are on display to students, many of whom study building systems. At the end of the building is a glass box where a classroom floats above the ground, facing a grove of trees. It’s one of several new buildings on the fast-growing school’s northern campus. A health-sciences building, applied-technology building, additional plant (solely for public works) and a gym have recently opened or are under construction. Wake Tech broke ground in August on its newest campus, its sixth, adjacent to Research Triangle Park. Raleigh’s newest office tower brings together about 550 Bank of America employees who had been scattered among four different office properties downtown and in north Raleigh. The 18-story North Hills tower houses the bank and its Merrill Lynch and U.S. Trust wealth-management groups, along with offices for G+S Communications, BusinessSuites, KPMG, Johnson Lambert, Newmark Grubb Knight Frank and structural engineers Ellinwood Machado. For the last 20 years, developer John Kane has been transforming the North Hills shopping center. Now, it’s a community of high-end retail, luxury apartments and office towers, including the newest BofA tower. Another 12-story office building is under construction, plus an AC Hotel and The Dartmouth apartments. Kane in September filed a request to rezone 34 acres in an adjacent development that could add 1.3 million square feet of office space, 125,000 square feet of retail space, 2,100 residential units, 950 hotel rooms and 450 senior-living units. What was a stockyard, auction house and auto-salvage repair business in once-blighted West Asheville is now home to a brewery and tasting room overlooking the French Broad River. Fort Collins, Colo.-based New Belgium is one of several western craft brewers that have made an eastern migration, starting with Colorado’s Oskar Blues Brewery, which opened a location in Brevard in 2012,  followed by California-based Sierra Nevada’s brewery, tap room and restaurant in Mills River. New Belgium offers tours of its brewery, which can produce 500,000 barrels annually. Thirsty visitors can sample the beer in the Liquid Center tasting room and on a deck overlooking a greenway with walking and bike paths, a tie to New Belgium’s signature bicycle. Duke’s iconic chapel reopened after a yearlong renovation, its first since opening in the 1930s. When a chunk of the limestone ceiling fell in 2012, the university began making plans for replacing the roof and the removal, refurbishment and return of seven large stained-glass windows. Crews also installed a new cooling system, cleaned and resealed the marble floors, and refinished the pews. The cathedral was designed by Julian Abele, the first African-American graduate of the architecture program at the University of Pennsylvania.