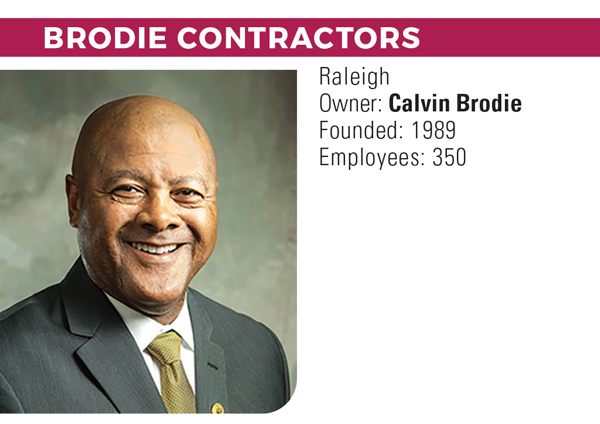 Masonry is the foundation of Brodie Contractors, so it’s not surprising that President Calvin Brodie has concrete views about the nature of the company he’s headed for more than 30 years.

“I want to compete, and if my stuff isn’t any good, I’m out of here,” he says. “The fact that I’m a minority, I don’t want to live on that. Legislation brought that in and the legislature can take it out. But if I show up with a good product and good crew of men, and my company performs well, the market is going to reward me. Always has.”

Bunn High School classmates Brodie and Alton Vines were masonry apprentices. In 1978, after graduation, they formed Brodie & Vines Contracting, which became a licensed general contractor in 1985.

Four years later, Calvin Brodie went on his own, forming Brodie Contractors. He encountered the usual ups and downs of startups. “Money is always a challenge, but when times got bad, I found most times I could walk into a place and people would extend me credit.”

Brodie Contracting added projects such as the Veterans Administration Hospital in Fayetteville, Central Prison Medical Center in Raleigh, and many Wake County and UNC System school buildings. Brodie also built the sound barriers along the Interstate 440 Beltline in Raleigh.

The COVID-19 pandemic caused delays and canceled projects, but Brodie’s diversification helped spur growth. It has a trucking and hauling division.

Brodie is a former president of the N.C. Masonry Construction Association and member of the National Masonry Instructors Association Hall of Fame. An idea that started with two brick-laying high-school buddies now employs about 350 workers.