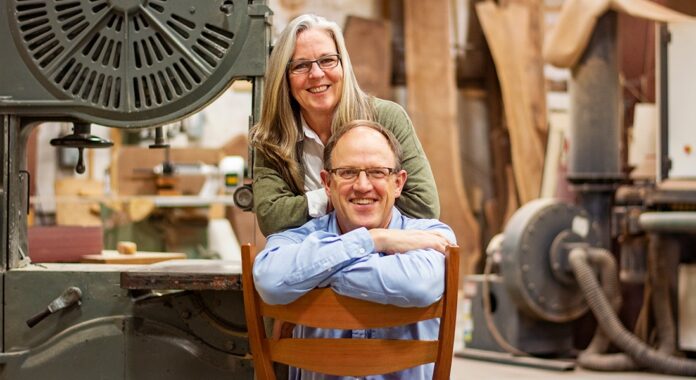 The Asheville-based furniture builder is led by founder and chief designer Brian Boggs and his wife, Melanie, the president and CEO. Courtesy of Brian Boggs Chairmakers, Photo By J. Scott Shrader.

In a state where most rivers flow east to the Atlantic, the French Broad gurgles along within eyeshot of the metal-sided shop of Brian Boggs Chairmakers on the fringes of Asheville’s River Arts District, westbound for Tennessee. If the river seems like it’s running uphill, Brian Boggs might too.

His nine-employee company marries futuristic design and advanced manufacturing with hand-craftsmanship in one of the state’s oldest industries, furniture-making.

“All the technology we have here in the shop was available in 1925,” he says. “We have tools newer than that, but not the technology. We plan to have a [software-guided] CNC machine as soon as we can get our hands on one, but we’re already doing stuff just as sophisticated. We’re just doing it a little slower.”

Boggs, 60, is founder and chief designer of the company, and his wife, Melanie, 56, is president and CEO.

The company was a featured player in September when the Economic Development Partnership of North Carolina, the state’s industry recruiter and cheerleader, organized a trade mission to Dubai in the United Arab Emirates. The Middle East is North Carolina’s second-biggest furniture export market, behind Canada but ahead of China. After a tariff war initiated by President Donald Trump, it’s the only one of the three that is growing. In a city known for ultramodern architecture and luxury shops, it was a natural fit.

“Anybody can make a chair just to sit in,” says Liz Isley, the partnership’s furniture export trade manager. “It takes a lot to be thoughtful about how it feels, looks, and what components you can incorporate into its functionality. The way they build and make their products, they’re never going to break or need fixing. They’ll be around longer than any of us.”

In December, a Boggs chair won the company’s third design award from the prestigious Chicago Museum of Architecture and Design.

The name Brian Boggs Chairmakers is misleading, Melanie says. It’s best known for sturdy chairs that conceal advanced technology, such as ladder-back dining chairs that weigh less than 9 pounds. But the company also makes tables, cabinets and other pieces that usually start at $2,000.

“More and more, we work with high-end architects who don’t want something off the shelf,” she says. A custom 12-foot-wide media cabinet recently sold to a New Jersey client for $22,500. A large portion of Boggs’ customer base comes from word-of-mouth. The company also has a showroom at the plant and markets online, through social media and in articles authored by Brian in Fine Woodworking and Popular Woodworking magazines.

Behind the furniture is an artist who has adapted advanced-manufacturing techniques in a marketplace dominated by mass production. Brian began art lessons at age 8 while growing up in Asheville and continued when his family moved to eastern Kentucky, where his father ran a dude ranch. Brian attended Berea College in Kentucky, studying French and philosophy. But he learned his craft on his own.

Brian began with $50 worth of hand tools in a small shop in Berea, then more than two decades later moved back to Asheville. Meanwhile, Melanie, the globetrotting daughter of a career diplomat, ran her own consulting company, teaching leadership, team-building and planning.

“I hired her to help me develop a strategic plan,” Brian says. That was in 2009. The two married in 2012. “We realized that design was my strong suit. We also explored taking it to a more comprehensive range of furniture and the teaching I wanted to do. It was clear I was going to need a partner.”

Brian developed an eye for productivity that shows up in some of the machines he has created in his 10,000-square-foot shop. He designed and built equipment such as the Brian Boggs spokeshave, a basic tool for hand-shaping chair legs and other similarly shaped components. It dates to Stone Age craftsmen, though Brian’s advanced version is now licensed and manufactured for woodworkers worldwide.

“We were forced to move from the last place,” Brian says. “The fire department frowned on the fact that it was a woodworking shop with more than 2,500 square feet with no sprinklers. But this place is ideal. It’s fenced, we’ve got $100,000 worth of lumber stacked outside, and to do all the things we do technically and physically, we need a place like this. It’s not necessarily the artist’s look, but creativity certainly isn’t impeded by the looks of the building.”

Inside, craftsmen cut, shape and finish chairs, desks and cabinets. What’s less obvious is that Boggs has engineered processes used to increase productivity. “About $80,000 to $100,000 a month is average,” says Melanie. “We’re not making 1,500 or even 100 of anything, and some pieces take so much longer.”

“The first I built was a bark-processing machine,” he says. “It really changed our game and how quickly we could produce the hickory-bark strips we wove our early seats out of. That led to broader thinking, not just about handles and blades, but frames, gears, motors, shafts, springs and other ways do things mechanically.”

Boggs also breaks other furniture molds. It scours western North Carolina for its hardwoods and uses, when possible, trees that have fallen naturally or been cut for rights of way or similar purposes. Nearly all of its materials come from the region, except for Honduran mahogany, which it gets through Greenwood, a nonprofit Brian helped found to manage forests in Honduras and Peru. One of its latest technologies is linen composite, in which linen fibers are embedded in a matrix similar to carbon-fiber composites.

“I was researching how to use wood fibers when I learned linen composites were used 3,000 years ago,” he says. “They formed the body armor for Alexander the Great’s army.”

Boggs is always looking ahead. “You have to set your standards really high,” Brian says. “We could be a company twice the size and still do that, but we have to put our emphasis on the higher end of the market. At higher volume and lower prices, this gets to be more of a materials-handling game.”

Boggs is considering designing for other, larger companies, Melanie says. “That might mean we produce some things, but others would be mass produced in another shop.”

What’s unlikely to change? “Our customers are basically connoisseurs of fine things who appreciate them and surround themselves with them,” she says.