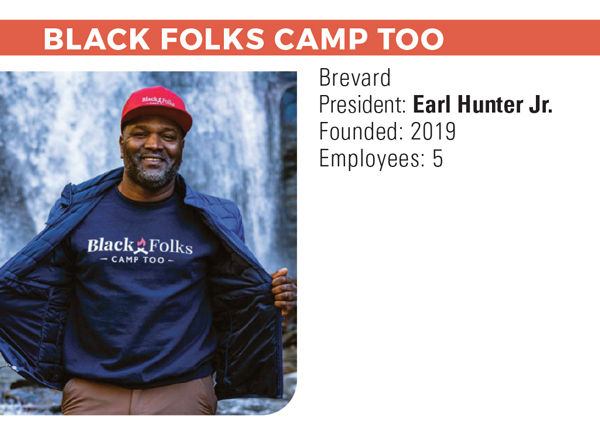 When Earl Hunter Jr. explains Black Folks Camp Too, people often mistakenly assume he’s running a nonprofit. After all, plenty of charitable initiatives have tried to urge more minorities to take up hiking and camping.

He saw the challenge first-hand while on a cross-country camping trip with his son when he encountered just one other Black family.

But Hunter, 45, is addressing the issue after serving as the vice president of sales for Brevard-based SylvanSport, which makes camping trailers and other gear. He realized that the Black community is a massive untapped market for the outdoor recreation industry, which he calls “probably one of the most segregated industries in the world.”

Hunter’s company has studied why so few Black people go camping. His conclusion is that for generations, many state parks and campgrounds in the South were for Caucasians, causing a long-term distaste. The resentment also goes back further to the Jim Crow era and advice from family members to avoid “the woods” because that’s where cross burnings and lynchings often happened, he notes.

Education, he says, is the solution. Black Folks Camp Too is working with state agencies in North Carolina and South Carolina to develop materials to help fill that knowledge gap. Outdoors enthusiasts also need to do their part by inviting Black friends, co-workers and neighbors to join them on trips to explore nature, he adds.

To foster a more inclusive environment, Black Folks Camp Too developed the “Unity Blaze” logo, which appears on stickers and other gear. “It’s letting you know that these people treat everyone equally” and it makes for an easy conversation starter, Hunter says.
His next initiative is helping historically Black colleges and universities develop outdoor recreation programs, attracting more Black professionals into industry and park system careers. Those jobs skew disproportionately white.

While most small businesses have expansion goals, Hunter hopes that Black Folks Camp Too can become obsolete if he’s successful in bringing diversity to the great outdoors. “Our hope is our company won’t be necessary in the next 10 years.”