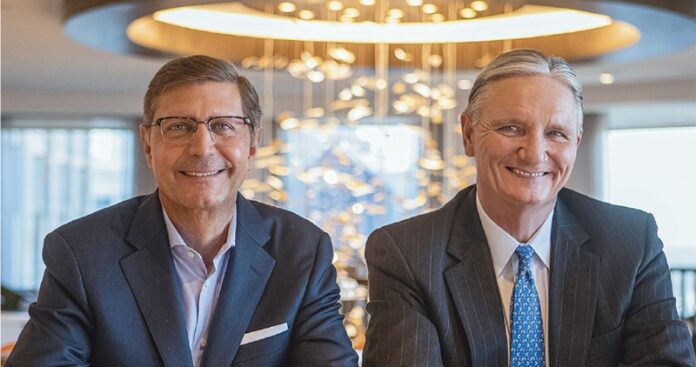 Three iconic N.C. families back an investment management venture that starts with $1.35 billion under management.

The Belk, Close and Bowles families are three influential Carolinas households whose business, political and charitable ventures have shaped the state for more than a century. Now, they are joining forces to back a new investment management and wealth advisory business poised to make a major mark.

Veteran N.C. banker Ralph Strayhorn (pictured above, right) and money manager Thomas Hoops (pictured above, left) launched Charlotte-based New Republic Partners in February. It became the sixth-largest Registered Investment Advisory firm in the Carolinas and is among the 50 largest in the Southeast with $1.35 billion in assets under management. The company also owns Roanoke Rapids-based New Republic Bank and has about 30 employees, about half of them based in Charlotte. Board members include Raleigh retail-chain owner Art Pope, a leading N.C. Republican, and former N.C. State Treasurer Janet Cowell, a Democrat who leads the Raleigh-based Dix Park Conservancy nonprofit agency.

The John M. Belk Endowment, the M.C. Belk Pilon family interests and the Springs-Close-Bowles family interests are clients and shareholders in New Republic. The combination brings together heirs of two famous families: The Belks built the nation’s largest family-owned department store chain and the Springs textile company was the largest industrial employer in South Carolina for decades.

New York private-equity group Sycamore Partners bought Charlotte-based Belk for $3 billion in 2015. Fort Mill, S.C.-based Springs, a public company for many years, combined its business with a Brazilian textile company starting in 2001. Members of the Belk and Close families were minority investors in the Carolina Panthers NFL football team, earning huge returns when hedge-fund owner David Tepper bought the team for $2.2 billion in 2018.

New Republic Partners plans to offer investment, advisory and credit solutions for individuals, families, endowments, foundations and advisers. Investors with $10 million or more are the target market for the firm’s “complete wealth-management services,” says Hoops, who is president and chief operating officer. The business will also market to accredited investors, usually typified as having a net worth of $1 million or more, he says.

“This is a very challenging time to be an investor, and their portfolios need to look different than they have historically,” Hoops says. Private-equity and private credit investments can provide greater return potential than traditional stocks and bonds, he adds.

Strayhorn is a Durham native and former bank CEO whose consultancy, Cape Point Advisory, worked with 15 banks during the 2007-09 financial crisis. Hoops is a 35-year veteran of the investment-management industry and a former executive at Wells Fargo and predecessor institutions. Most recently, he was on the executive committee at Legg Mason Global Asset Management, where he led global product strategy, M&A and strategic investing.

“The investment team at New Republic Partners brings innovative thinking and a high degree of expertise,” says M.C. Belk Pilon, president and board chair of the John M. Belk Endowment. She will be on New Republic’s board along with Sam Bowles, who is joining the business as a managing director. He is the son of former Springs Industries CEO Crandall Bowles and Erskine Bowles, a Charlotte investment banker and a former UNC System president. Pilon is the daughter of the late John and Claudia Belk. John Belk was a former Charlotte mayor who led Belk Store Services for many years, while Claudia Belk was a local district court judge.

“We partnered with New Republic Partners because they expanded our capabilities in ways that other asset managers and advisers could not,” Sam Bowles said in a release.
New Republic’s staff includes people who have overseen investments for the Belk and Close family offices. Chief Financial Officer Jason Grooters is a former chief accounting officer at Raleigh-based First Citizens Bancshares.

New Republic Bank opened in 1998 and has offices in Roanoke Rapids, Burlington and Rocky Mount. Other parts of the business include the advisory firm and a broker-dealer, New Republic Securities. ■