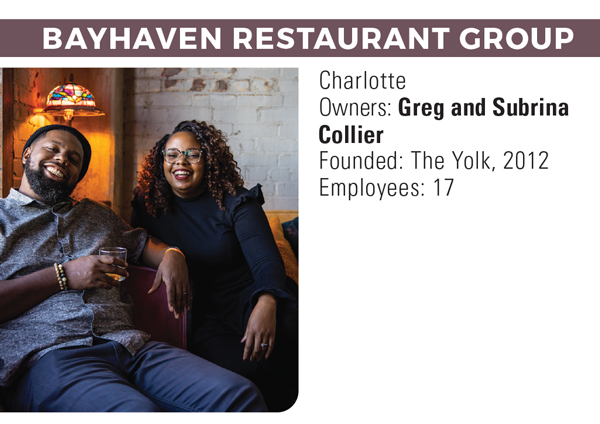 Pivoting through the COVID-19 pandemic has been a hurdle for the hospitality industry, but restaurateurs Greg and Subrina Collier have not lost momentum. “We are a Black couple from Memphis, Tenn. [Pivoting] is literally what we have been doing our whole lives,” he says.

While navigating shortages and other obstacles during the pandemic is a notable feat, Collier says the couple’s greatest success has been operating successfully while remaining true to their personal mission.

“People know who we are. People know parts of our story,” he says. “For us, to be authentic and to be good at what we do at the same time is probably our biggest accomplishment.”

The husband and wife team opened their first restaurant, The Yolk, in Rock Hill, S.C., in 2012 after moving to the Charlotte area from Arizona. “We found a place that was really a hole in the wall, had carpet on the ground … and I was like, ‘This is it,’” Greg says.

“I missed the South, and I had something to say. I knew that I wanted to put my food out there. I knew I wanted to learn who I was as a cook and as a chef later,” he says. “I knew I wasn’t going to do that working for someone else.”

At the beginning of 2019, the Colliers moved their business to Charlotte’s 7th Street Market under a new name, Uptown Yolk. That same year, Greg was a semifinalist for the James Beard Best Chef award for the Southeast, a first for a Black chef in Charlotte. The pandemic forced the restaurant’s closing in 2021, but plans call for a reopening this spring.

Meanwhile, the Colliers opened Leah & Louise in March 2020 at Charlotte’s Camp North End, a rustic factory redevelopment about 2 miles from the center city. The Mississippi Delta-inspired restaurant with a juke-joint atmosphere gained national renown, though its first four months were restricted to curbside pickup because of the pandemic.

In November 2020, Leah & Louise was named one of the best new U.S. restaurants by Esquire Magazine. In the following year, Greg and Subrina formed BayHaven Restaurant Group with a mission of fostering economic empowerment and community development.

Unafraid to take chances, the Colliers restructured their business model last year by adding a 23% service charge to all Leah & Louise guests’ checks. The purpose was to replace traditional tipping and create more consistent wages for their service team.

In addition to reopening Uptown Yolk this year, the Colliers are planning the return of the BayHaven Food & Wine Festival — which made its debut in October 2021 — and are launching new concepts, while also focussing on mentoring rising chefs. “At the beginning, my legacy was to be the best chef I could be. Now, my legacy is to create a space for and give the next generation the skills to be great chefs.”