The largest investment advisers based in North Carolina.

Managing other people’s money is a terrific business even in a pandemic, particularly when the investment markets are robust. That’s an obvious conclusion from Business North Carolina’s latest annual ranking of firms that manage more than $1 billion of assets.

All but six of the 34 companies listed reported growth in assets under management last year, similar to the previous year when 31 of 36 firms showed gains. The data is based on the companies’ most recent annual filings with the U.S. Securities and Exchange Commission, which are detailed snapshots that include number of employees, amount of assets managed, enforcement actions and key owners.

Most of the companies invest in stocks and bonds, though the list includes a few private-equity groups and those focused on alternative investments. Large asset managers that are based outside North Carolina are not included, such as Fidelity Investments, Goldman Sachs and Vanguard Investments.

As in prior years, the rankings are dominated by two large companies: CapFinancial Partners of Raleigh and Barings of Charlotte. CapFinancial is the parent of Captrust Financial Advisors, which has grown through mergers with 48 companies since 2006. Lenoir native Fielding Miller co-founded the business in 1996 by targeting then-newfangled retirement plans called 401(k) accounts. Last June, Captrust sold a 25% stake to Chicago-based private-equity group GTCR with Miller remaining the largest shareholder.

The S&P 500 Index increased 16% in 2020 and advanced another 10% through May 20. That obviously gave a lift to stock-oriented investment companies that dominate this list. Nine companies reported increases in assets under management of more than 20% from a year earlier, led by three Charlotte-based companies that each posted gains of about 30%: Biltmore Family Office, Adhesion Wealth Advisors and Bragg Financial Advisors.

Two private-equity firms on the list — venture capital investor TrueBridge Capital Partners of Chapel Hill and Five Points Capital of Winston-Salem — were acquired over the past year by Dallas-based P10 Holdings, a publicly traded asset manager. 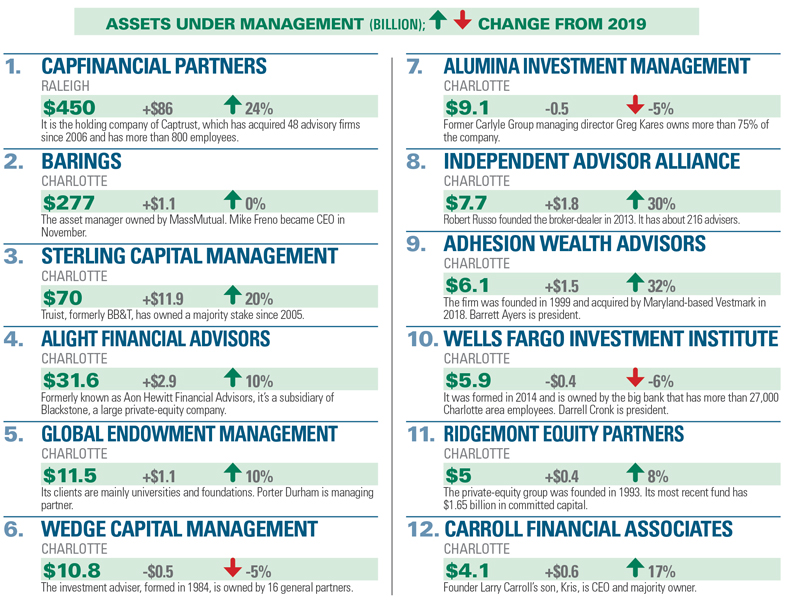