Bankers don’t save lives directly such as doctors and nurses, but the sense of gratification involved in helping small businesses survive the lightning-fast economic collapse this spring bore some similarities.

That sentiment came through clearly when Business North Carolina assembled three of the state’s bank presidents and two industry experts for a round table discussion in early May.

“The tears and joy that these [business owners] are feeling from getting these funds so they can pay their employees and live another day, it’s almost like a doctor saving someone’s life,” says Brian Reid, TowneBank’s Triangle bank president. “In my 30 years of banking, I’ve never seen anything like it. And I’d kind of like to never see it again.”

Jim Hansen, regional president of PNC Financial Services in Raleigh, has a wide perspective with more than 150 branches in North Carolina. “The global pandemic has affected the smallest to the largest businesses and consumers across the state. With our footprint across North Carolina, we see and feel that from all corners,” he says. “And everyone has stepped forward to meet the needs of North Carolina businesses.”

The N.C. Bankers Association includes 84 banks, “and this is a beautiful random sampling of our community of bankers who are waking up every day with a sense of purpose,” says Peter Gwaltney, president and CEO of the Raleigh-based group. “[They] are helping small businesses despite whatever challenge was thrown at them.”

“Everyone” includes Congress, which passed a massive spending bill that included the Paycheck Protection Program, or PPP, on March 18. Within two weeks, about $350 billion had been extended to businesses with 500 or fewer employees that pledged to use the money to maintain payroll and pay basic business expenses. The lending followed nearly around-the-clock work where banks collaborated with businesses to submit applications for the funds.

Demand was so great that Congress extended another funding round of $310 billion. Megabanks like Charlotte-based Bank of America and small-community lenders including Albemarle-based Uwharrie Bank enlisted staffers from other departments to handle the flood of requests for the unprecedented loans.

Through May 16, about 109,000 N.C. companies and nonprofits had received loans totaling $12.3 billion. The money is forgivable, provided recipients follow rules established by the U.S. Treasury and Small Business Administration. 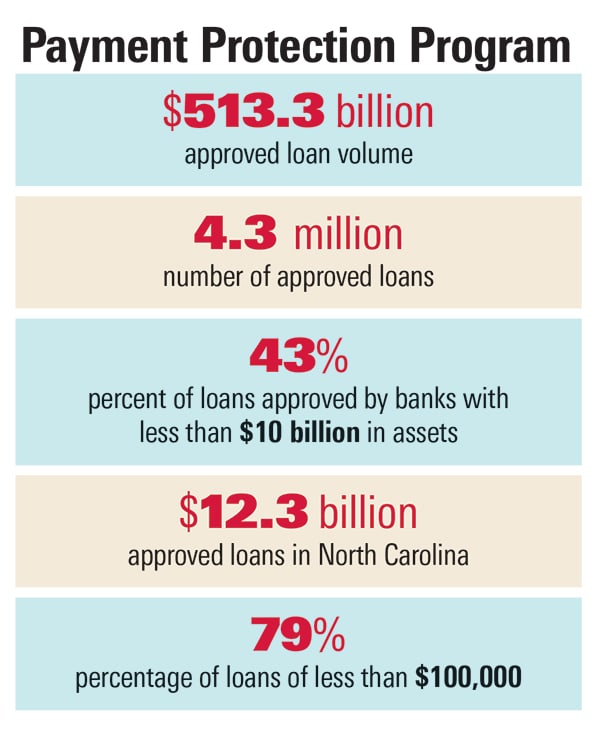 Lenders say they won’t make much on the PPP loans, which have two-year maturities at 1% interest. Borrowers don’t have to pay for the first six months, while lenders get from 1% to 5% of the loan value in fees. The government bears the credit risk.

Gwaltney compared the bankers’ rapid shift to the PPP program with Winston-Salem-based apparel maker Hanesbrands’ pivot to producing face masks. “There was a sense of civic duty,” he says. “The banks were asked to do something, and they stepped up, and they did it compassionately.”

At Uwharrie Bank, most of its 190 employees got involved in supporting the PPP project, including technology staffers who helped streamline processes, says President David Beaver. He recalls a colleague with 35 years of experience in banking describing how the president of a local nonprofit was moved to tears after receiving a $14,000 PPP loan necessary to meet payroll for 60 days. “Those are the kinds of stories that are motivating people to work around the clock,” Beaver says.

The sense of community extends outside the bank’s offices, he adds. He cites how an Albemarle convenience store started carrying items made by a local baker whose business had closed. “It’s neighbors helping neighbors. This crisis has really created a sense of community and shown the American dream of resilience.”

While few foresaw the potential devastating impact of the novel coronavirus, the banking industry is much better prepared for this shock because of stiffer capital regulations instituted following the last recession. “Banks of all sizes are much better capitalized than in 2007-08,” Hansen says. Adds Reid, “The good or bad of going through 2008 is that it made us tougher. This is the rainy day. So when it came, we as an industry [were] in much better shape than we’ve ever been in to handle this.”

The Small Business Administration also had to turn on a dime to manage the process, says Thomas Stith III, the agency’s N.C. district director. “It has been a challenge. You don’t start a $349 billion program in one week. That doesn’t happen,” he says. “But as we moved around the state, we saw how this is impacting our communities. These are our families, our neighbors, and while we are interested professionally in small-business finance, this is a people business.”

To be sure, lots of tough decisions loom for many small businesses. The three bankers say they hope federal regulators will continue showing flexibility in how banks account for past-due loan payments. “It will be interesting if regulators will let us have another round of flexibility depending on how quickly we come out of this crisis,” Reid says. “It won’t do the consumer or the business or the bank any good if we are more strict before we get back to normal.”

Banks routinely run stress tests to gauge problems should clients struggle, Beaver notes. But they haven’t tested for a 90% decline in business, which is what some restaurants, hotels and others have suffered, he says. “What we’re concerned about from a community perspective is how long this will last and how long businesses can last if this isn’t over by June 15.”

The good news is that North Carolina is positioned to return to above-average growth when the economy picks up, Stith says. “We were a very strong state economy, and we’re going to come out of this even stronger.”

Reid predicts the long-term trend of businesses and residents shifting to the South will accelerate. “I think this might put a little turbo on that,” he says. “People from the Northeast [U.S.] might move a little faster if they can get out of their existing houses.” The Triangle, with its strength in higher education, technology and state government jobs, “will probably fare better than anyone in the country.”