Bank of America’s Erica is a virtual banking assistant

Charlotte-based Bank of America didn’t become a dominant megabank without outsized ambition. So if Apple has Siri, Samsung has Bixby, Amazon has Alexa, surely BofA can’t stand by and join the dustbin of companies outfoxed by technological advances.

Enter Erica, the bank’s virtual assistant that it hopes can revolutionize the mobile-banking experience. The product, named after the last six letters of the bank’s name, rolled out nationwide in June 2018. By the end of 2019, more than 10 million of the bank’s 29 million mobile users were utilizing the service to answer lots of simple questions — and a few complex ones — about their accounts and finances.

In less than two years, Erica has been used more than 100 million times and helped BofA establish credibility as it competes with tech industry giants that are edging into financial services.

Erica and the other assistants incorporate artificial intelligence to perform various functions, making for a valuable advance as business and society become more reliant on data and technology. BofA has emerged as a tech leader in banking, though its number of mobile users trails JPMorgan Chase, which has 37 million users, Forbes reported in December.

McLean, Va.-based Capital One Financial has introduced a virtual assistant called Eno, while other large companies such as Wells Fargo and Ally Financial rely on products known as chatbots that don’t perform as many functions as BofA’s offering. 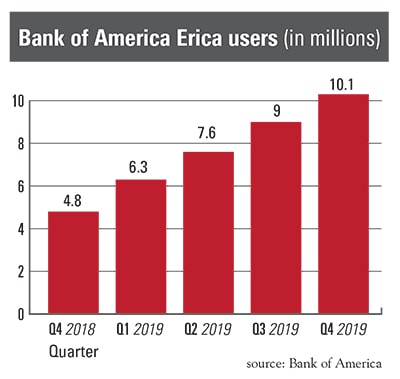 Erica makes it easier for customers to navigate functions offered through the bank’s app including changes to credit scores, refund confirmations, spending snapshots and balance predictions. Service is targeted based on individual spending patterns, income and other details scooped up in data searches and massaged through artificial-intelligence technology.

BofA got serious about developing a virtual assistant in 2016, says Christian Kitchell, AI solutions executive and head of Erica. Based in New York and a co-founder of a big data market-research company, he joined BofA’s Merrill Edge business in 2013.

The bank saw the advances that Amazon and other tech leaders were making with their AI-powered assistants and realized there were ways it could be applied to financial services to aid customers, Kitchell says.

Through focus groups and deliberation with clients, BofA concluded an assistant would help achieve three key goals: reducing debt, avoiding surprises such as upcoming bills or overdrawing from an account, and creating a plan that can balance competing financial goals.

“We got a pretty clear signal out of the gate as to what clients thought would be most helpful,” Kitchell says. “From there, we started developing the framework in terms of what Erica’s capabilities might look like from the most basic to the most complex. And that’s what really informs our roadmap that has gotten us where we are today.”

Building Erica required artificial intelligence, which encompasses tools and techniques used to help machines mimic human behavior. The goal is to program machines to think and complete tasks like humans. Making that happen requires a multitude of complicated algorithms and mathematical functions.

Beyond automating simple tasks, artificial intelligence is increasingly used to analyze data, provide insights and recognize patterns by using Silicon Valley buzzwords such as “neural networks” and “machine learning.” Today’s computers can understand and comply with requests, making Siri, Alexa and other voice assistants valuable for millions of Americans.

Most of BofA’s tech work was done in-house, though it used partners for adding some more advanced functions, such as converting speech-to-text and text-to-speech so Erica can “talk.” The initiative “literally touches almost every part of [the] organization,” Kitchell says.

Bank officials say that use of Erica is steadily increasing, with about 45% of users in the millennial age range, 35% Gen Xers and about 20% baby boomers. “I think we all expected to probably have a higher level of adoption among millennials and Gen Xers out of the gate,” Kitchell says. “We’ve actually been really encouraged by the response we’ve gotten from the boomer segment in the sense that Erica is a great ambassador for our mobile capability, particularly for those who are uninitiated or haven’t done a ton in the mobile space.” 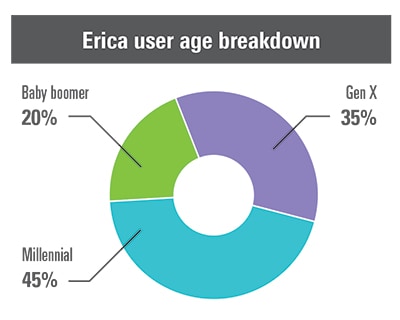 Erica mixes speech, text and on-screen gestures such as swiping to communicate with the technology. “Over time, the vision is to bring those pieces closer together so that you don’t necessarily know where a traditional navigation experience ends and conversational experience begins,” Kitchell says. “It just feels very natural, very intuitive.”

Kitchell says BofA doesn’t consider Wells Fargo, Capital One or other finance companies as key tech rivals. “From the outset, we never looked at other financial providers as our primary competition,” he says. Rather, the view is that tech industry leaders pose the biggest challenges.

The bank thinks its approach is working: About 60% of BofA customers say Erica is better than other leading virtual assistants, while 30% say it’s comparable and 10% say it’s worse, according to internal consumer-satisfaction data. That’s encouraging considering the bank started its product later than those other companies.

Kitchell says the guided service has acted as a first stop for addressing customer problems, which reduces calls to the bank’s customer-service centers and lets associates focus on more critical client issues. Erica also encourages customers to try various other BofA products, driving sales.
Concern that artificial intelligence will wipe out jobs of tellers and financial advisers is overstated, he says. Rather, he suggests Erica is a complementary tool that can help human workers serve clients more efficiently. 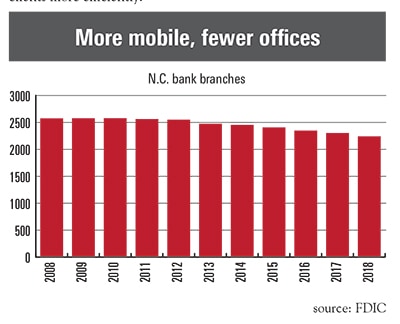 But as Erica develops, Bank of America will add more capabilities over the next two years that sound a lot like the work of many current bankers. “It’s not just going to be a consumer-banking relationship,” Kitchell says. “Ultimately, we want to be able to deliver holistic guidance, insight and advice from banking to cards, loans, and into investing and wealth management.”

Indeed, artificial intelligence is transforming the workplace, as BofA’s top technology executive, Cathy Bessant of Charlotte, has made clear. In a February interview with Fast Company magazine, she said BofA is devoted to helping staffers displaced by AI-inspired changes to gain training for the many unfilled jobs in all areas of technology.

After 100 million responses, it seems Erica is just starting to feel its oats. “This is not about a one- or three-year initiative,” Kitchell says. “It’s a long-term initiative to transform the client experience for the better. And again, we think we’re on a very good track right now, but it’s a long-term journey.”