Avadim’s decline and hopes for a rebound 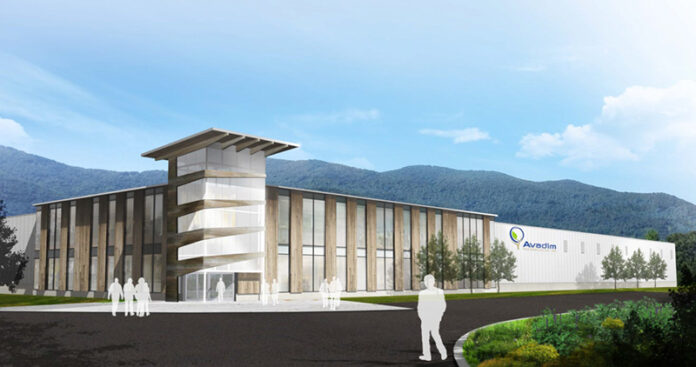 His 1800s forebearers wrestled a living from the rugged Cataloochee Valley a hundred miles west of Asheville, and now, in his middle 50s with hair as white as his lab coat, Steve Woody is modest. “I’ve been blessed,” he shrugged during an interview in 2015, overlooking a humming clean room.

His Asheville company, Avadim Technologies, was pioneering microbiome skin products that work with the body’s billions of bacteria and other organisms to fend off infections such as the deadly MRSA superbug. Its brands such as Theraworx are becoming staples for preventing infections in more than 1,000 nursing and long-term care homes and acute-care hospitals. Hawked in television infomercials and used by major college sports teams, Avadim’s products are sold in 50,000 pharmacies and retailers including Dick’s Sporting Goods.

Impressed, the N.C. Chamber singled out Avadim as one of its manufacturers of the year. Inc. Magazine ranked the company on its list of the nation’s fastest-growing industries, citing growth of more than 2,500% from 2015 to 2017.

Woody sketched plans to expand to more than 550 employees and move to a $25 million plant in nearby Black Mountain, attracting 1,300 investors. Local and state governments provided $2 million in aid for what promised to be one of the region’s biggest economic developments. The nonprofit Golden LEAF Foundation, which metes out money from a nationwide tobacco-health settlement, anted up $775,000 to build water infrastructure at the Black Mountain site because of the company’s growth potential and plans to pay average wages of about $51,000 a year.

“In economic-development speak, that’s a local company with national and international promise,” says Clark Duncan, the Asheville Chamber’s economic development head. “They would have a transformative impact for our economy out here in the west. We had lots of high hopes.”

Then the gazelle stumbled. In May, mired in $80 million in debt and having posted $138 million in losses between 2018 and 2020, Avadim filed for reorganization in federal bankruptcy court. It came as three dozen major creditors circled and efforts to find new money failed, partly because of the worldwide coronavirus pandemic.

Avadim Health, renamed during the bankruptcy, now operates with nearly 100 employees. “We’ve stabilized things here and are looking forward  to continued growth,” says New York restructuring specialist Keith Daniels, who Hayfin hired as CEO. “We had to reset the operation, but we have a good platform to build on.”

Daniels won’t discuss finances. “I can’t comment on that. We’re a private company.” To be sure, the business is a bit player in the $20 billion or so of assets managed by Hayfin, which was started in 2009 by the U.K.-based TowerBrook Capital Partners private-equity group.

In Western North Carolina, once-enthused elected officials, economic developers and community boosters wonder what went wrong at the company they expected to lead the region’s resurgence in the state’s burgeoning life-sciences industry.

“It was a really significant event in [Black Mountain’s] history when the governor — Pat McCrory — came here in 2015 to make the announcement at the Commerce Park site,” Mayor Larry Harris says. “Just the thought of all those jobs coming to Buncombe County made it a really grand occasion.”

Woody and other Avadim executives declined requests to discuss what happened. Daniels won’t say if Woody is involved anymore. “I can’t comment. Nothing has been formalized.”

Interviews and legal documents describe an innovative company that was hampered by too much borrowing and an unexpected pandemic.

“It’s not uncommon for companies in those first few years to be burning through a lot of cash,” says Ben Teague, vice president of strategic development at Biltmore Farms and former head of the Buncombe County Economic Development Commission. “But Steve’s a visionary, and this is still very much a viable product. I don’t doubt he’ll find his way through this and come out successful on the other end.”

That’s a common sentiment about Woody in western North Carolina.

The Asheville native was a high school soccer star who majored in math at UNC Asheville. After graduating in 1989, he joined Medical Action Industries, a Brentood, N.Y.-based manufacturer of surgical equipment. He stayed for a decade as its sales grew from $75 million to more than $300 million.

From his initial $4.50-an-hour job, Woody rose through the ranks in the heavily regulated businesses of medical devices and pharma development. He consulted with manufacturers, then formed his own company. He helped guide more than 30 medical-equipment businesses through regulatory thickets and plan for product launches.

In 2006, he came across a manufacturer of an antiseptic wash used to bathe nursing-home residents. A year later, he bought rights to the technology, and Avadim was born. (“Avadim” is Hebrew for servant or slave, depending on which scholar you ask.) His initial product, which could be sprayed or wiped on patients, was effective against urinary tract infections, the bane of long-term hospital stays.

“My vision is for Asheville to be for medical devices what Raleigh is for the pharmaceutical industry,” Woody told Business North Carolina in 2015. Avadim’s wound-care products have the potential to save millions of lives, particularly in developing countries with weak health care systems, he said.

The company continues to produce Theraworx Protect for immune health; Combat One, mainly marketed to first responders to prevent infections; three cosmetic products; and three homeopathic drugs for joints and muscle cramps, according to Daniels. A partner at New York-based Carl Marks Advisors, he was the court-assigned bankruptcy case trustee before becoming interim CEO.

Woody’s key partner was David Fann, recruited as president in 2012. Fann had been a CEO or president of several startup companies in Florida and California involving solar energy, finance and technology. From 1995 to 2002, Fann was CEO of Teraglobal Communications, a San Diego-based public company that disappeared following the dotcom bust of the early 2000s. From 2000 to 2002, Teraglobal’s board chairman was Asheville civic leader Jack Cecil, president of the Biltmore Farms development company.

Along the way, Woody impressed many potential investors, several Asheville acquaintances say. It was easy casting him as a homegrown business talent who decided to stay put rather than relocating to a larger city.

Among the company’s directors was Charles Owen III, the former CEO of Beacon Manufacturing, once the world’s largest blanket maker. It closed in 2002. Owen is board chairman of UNC Health, one of the state’s biggest health care systems. He didn’t return calls seeking comment about Avadim.

Local acquaintances say Woody was believable in 2015 when he predicted Avadim would have 900 employees by 2021. “I don’t know of anyone who doesn’t like and respect [Woody],” says an investor who asked not to be named.

Avadim, despite innovative and popular products, had barely kept its financial head above water for years. In 2013-14, the cash-strapped company was rescued by grants from the Mission Foundation, a nonprofit organization affiliated with Mission Health that supported local medical initiatives, according to people familiar with the matter. After the sale of Mission Health to Nashville, Tenn.-based HCA Healthcare in 2019, the foundation shut down and grant records are no longer available, officials say.

In 2016, Fann led local leaders on a tour of the company’s new manufacturing and distribution center in Swannanoa. It was in a repurposed, long-vacant Beacon warehouse. He told Business North Carolina the company had raised more than $4.5 million toward the $25 million it expected to need for a larger plant that never got off the ground.

Woody and Fann had raised more than $120 million in debt and equity, including investments from about 1,300 individuals, Daniels told the bankruptcy court in May. It’s unlikely they will recoup their investment, he said in early November.

As its Theraworx commercials became standard fare on cable television, Avadim’s losses were mounting. Starting in 2018, the company ramped up borrowing to support its growth. Not more than a year later, it was missing payments and begging lenders for more time to pay its debts, Daniels told the court.

Company leaders pinned their hopes on an early 2020 initial public offering plan aimed at raising $75 million to pay for the Black Mountain plant and give the business some breathing room. But it never materialized as the worldwide coronavirus pandemic chilled financial markets, stalling many IPOs. The virus was also strangling attempts to boost sales. It was difficult for Avadim’s sales force of more than 50 to line up face-to-face meetings because of COVID-19, according to a Midwest sales representative who asked to remain anonymous.

Like many N.C. businesses, Avadim benefited from the federal Payroll Protection Plan, receiving a $2 million forgivable loan while telling federal authorities that it then had 238 employees. It wasn’t enough.

“They just needed that IPO capital to make their business go,” says Black Mountain Mayor Harris. He believes Avadim was poised for its shovel-ready site. “We have an interstate exchange — Interstate 40 — already funded, with right of way to begin in 2023 and construction in 2025, and everything was promising and exciting,” he says. “They were going to build their headquarters there, and their product had great market appeal.”

In February 2021, Woody sent Harris and the Black Mountain Board of aldermen a statement canceling the plant, blaming the company’s travails on the pandemic.

“It limited the capital the company needed to grow and launch two of the new products we had ready to put on shelves in over 50,000 pharmacies,” Woody wrote, while killing “other expansion plans.”

Ever upbeat, he added that Avadim had record sales in the second and third quarters of 2020 “even though we couldn’t call on hospitals, long-term care facilities or even some pharmacies.” Avadim’s net revenue increased from about $11 million a year to more than $45 million between 2017 and 2019, internal records show. Continued growth was likely, Woody noted.

Costs, however, were rising even faster, Daniels told the bankruptcy court in Wilmington. Avadim was bleeding money, “despite the fact the company’s revenues have increased steadily over the past several years,” he says. Debt exceeded assets by almost $80 million.

The company had, for at least a decade, been pumping “tens of millions of dollars” into brand-building but failed to gain “sufficient market foothold to fully fund its operations.”

With its IPO hopes fizzling, Avadim was left with a well-known brand, large stocks of unsold inventory and increasingly restive workers. In May of this year, just weeks before its bankruptcy filing, Avadim allocated $185,000 as bonuses to retain non-executive workers.

Then, in mid-August, the court transferred the company to its secured creditors.

On a recent steamy summer day, the Black Mountain Commerce Park site was quiet, its mountain backdrop shrouded in haze. The dream that the company would proclaim the region as a major player in Tar Heel health sciences was in the hands of strangers from far away.

“It’s too early for a postmortem,” Ben Teague says. “This is not the buggy whip. I’d never give up on a company that has good products and good people. There’s hope.” ■

David Mildenberg - 06/15/2022 0
Someone wants to add toll lanes to the often-congested stretch of Interstate 77 between center-city Charlotte and the South Carolina state line. But that party doesn’t want its name in the public yet. So...
Read more
Share
Facebook
Twitter
Linkedin
Email
Previous articleNC trend: Congdon family spurs High Point innovation
Next articleNC trend: 10 North Carolinians who scored big in 2021

Round table: Travel and tourism, back to work and play