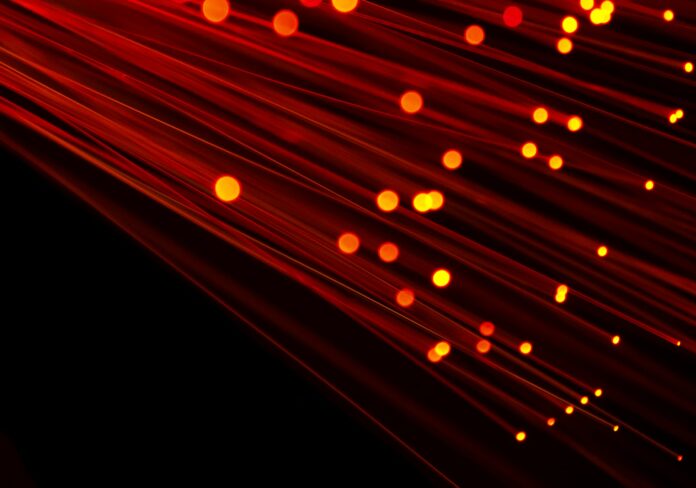 One of the biggest infrastructure projects is the wiring of America for high-speed Internet. An historic impact of the pandemic was a shift in how broadband came to be viewed: as essential, like roads and electricity. We saw stories about kids in homes with inadequate or nonexistent Internet access, sitting in parking lots next to buses with wi-fi.

AT&T recently announced that it has reached 1 million customer locations in North Carolina with its fiber network. In other words, it has installed fiber optic cables along enough roads to pass a million homes and businesses.  AT&T fiber is now in parts of 60 communities in 26 counties.

It may be in your neighborhood, and you saw them digging. Or you may have seen one of the other companies that are busy in North Carolina installing fiber. According to Broadbandnow, there are a couple hundred Internet providers in North Carolina, most of them small, but regional and national companies are expanding in a lot of different places.

For example, NorthState Communications announced earlier this year that it would be expanding its fiber and passing 53,000 homes and businesses in four counties. Charter Communications, which is branded as Spectrum, announced last year it was expanding high-speed internet to 128,000 home and business locations where broadband wasn’t available.

“We’re right in the middle of what I would call a revolution in communications,” says Rabon, “with the advent of fiber and next-generation Internet technologies.”

Some of you older folks may remember Ma Bell, the original AT&T local and long-distance monopoly. In the 1980s, a federal antitrust case resulted in a breakup of AT&T into regional “Baby Bells.” Southwestern Bell became SBC and then bought the old AT&T parent, and then BellSouth. It operates under the old name, AT&T, but lives in a very different competitive environment. The Dallas-based business is now one of the country’s largest wireless providers with a massive fiber-optic network providing broadband service.  For a while, AT&T got into the entertainment/media business with the acquisition of Time Warner in 2018, but it spun that off into a new company that merged with Discovery in April.

With fiber, the telecommunications industry is building a network that may last a long time.  Once fiber is in pipes in the ground, it can be upgraded without digging a lot of new trenches.

“Think about it like a highway system,” says Rabon. “If you move from dirt roads to paved roads, that’s significant.  Once you have a paved road, then the question becomes scale. You go from two lanes to four lanes to eight-lane superhighways.”  The size of the road grows, but the underlying technology — the strands of fiber-optic cables — remains basically the same.

One of the first AT&T fiber markets in North Carolina was Raleigh.  “As we laid that fiber, it had a one-gigabit per second symmetrical service. Meaning speed up is one gig and speed down is one gig.

“Well, we did an upgrade over the past year that increased those speeds to five gigabits per second to those households that choose to subscribe to it, without changing anything to the infrastructure,” says Rabon.  “We just changed cards, if you will, pieces of equipment inside a cabinet. And we are now testing speeds of up to 20 gigabits per second on our networks.

“So, you basically can change the head-end equipment, and you do have to change the router, the gateway device at the customer’s home so that device is also able to operate at those faster speeds.”

The use of fiber — sending data as high-speed light impulses through glass strands — isn’t new. What is new is the extent to which it is being deployed.

Every technology prior to fiber was built for a specific use, so DSL was using copper lines originally built for voice calls, for the old landline service. Cable was designed for video. Cellular was originally built for wireless voice communications. And as Internet traffic expanded greatly, all this infrastructure was being asked to do things for which it wasn’t originally intended.  Fiber, on the other hand, “is specifically designed and built for high-speed Internet access,” says Rabon.

The pandemic changed the economics of broadband and fiber in significant ways. Congress has allocated more than $100 billion for broadband construction, and North Carolina’s $350 million GREAT program will spend at the county level. Programs are in place to help low-income residents to afford broadband.

Because so many people were working from home and so many children were learning from home, the market’s acceptance of broadband has changed.

“In Wake and Mecklenburg, you’ve got 100% availability to some type of high-speed Internet access, but your adoption was anywhere between 87 and about 90%, and so you had some folks who weren’t adopting,” says Rabon.  “You go into a rural area, we were looking at 40%.  Sometimes we would get up to 50% adoption rate.

“Well, COVID laid bare the acute need for high-speed Internet access for education, for telehealth, for remote working, and those adoption rates increased significantly across the board.  And what that did is that allowed for a shorter-term return on investment, which spurred additional investment and capital in fiber.”  What has happened is that as more fiber was being manufactured by companies such as Corning in North Carolina, it created economies of scale and drove down the cost.

The economics of fiber have fundamentally changed over the past five years, says Rabon.  “It’s allowed us to accelerate our fiber build plan across the country, really, in ways we never anticipated.

“Five years ago, we had about 13.5 million customer locations served by fiber across the country.  And that increased to 15 million.  And then over the last year, we’ve added another 2.4 million, with the goal of getting to 30 million by 2025.

“When you think about it, we really didn’t add a lot over five years, and then because of the economics of fiber and because of the way the world has turned — and the ecosystem that really wants low latency and higher speeds — we’re going to double that footprint in five years.