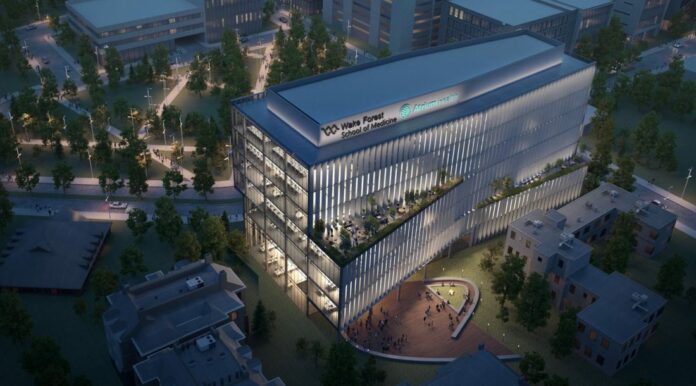 Atrium Health envisions the “Silicon Valley” of health research between Winston-Salem and Charlotte once it has established the expanded Wake Forest School of Medicine in the Queen City, CEO Gene Woods told Atrium’s board Tuesday. (The rendering above shows a potential building housing the Charlotte campus, shared today by Woods.)

Citing a study by consultants Tripp Umbach, he said expanding the Winston-Salem-based medical school into Charlotte will create a $2.5 billion economic impact and 20,000 “high-paying jobs.” Charlotte-based Atrium is partnering with Wake Forest on the medical school expansion, though few details have been announced as federal regulators examine the deal. Woods said the school may have 1,600 educators, 3,200 “learners,” and promised more information will be forthcoming later this year. Officials had hoped to complete the transaction by now.

Atrium’s financial report issued at the meeting suggests it has the financial firepower to pull off Woods’ agenda. The Charlotte-based health care system had investments and cash topping $7 billion as of June 30, a number that has likely increased given the stock market’s strong performance in the last six weeks.

To be sure, the COVID-19 pandemic took a toll on the system’s finances during the first half of the year, as it has many hospital systems. Woods noted that Atrium has shown national leadership during the crisis through various approaches, including a virtual hospital program that enables patients with positive virus tests to be treated at home rather than entering Atrium’s sites. It has also emphasized testing and treatments for low-income and minority communities that are suffering the most from the pandemic, he said.

Atrium lost $36 million on operations in the first half after budgeting a gain of $104 million, officials said. Net patient revenue declined 9% to $3 billion during the six months, compared with a year earlier, as the system temporarily suspended elective surgeries to focus on COVID-19 care. But total operating revenue fell by less than 1%, to $3.7 billion, buoyed by $300 million in federal stimulus funds that helped the system sustain care during the crisis and avert layoffs. Total operating expenses increased nearly 4% to $3.7 billion because of higher costs for supplies and personnel.

Declining investment values in the first half caused a non-operating loss of about $267 million, versus a gain of $572 million in the same period last year.

Atrium’s net loss for the six months was $303 million, versus a $675 million gain last year. It’s a relatively small hit given the system’s strong balance sheet, which includes long-term debt of $2.2 billion.

These results don’t include relatively modest results of hospitals that Atrium manages in Morganton, Valdese, Whiteville, Laurinburg, Columbus and Wilmington.

There was no mention at Tuesday’s meeting of Atrium’s failed bid to partner or acquire New Hanover Regional Medical Center. The Wilmington health care system’s board and the New Hanover County Commission are favoring Winston-Salem-based Novant Health’s bid to take over the system in a transaction topping $4 billion. Final approval is pending.