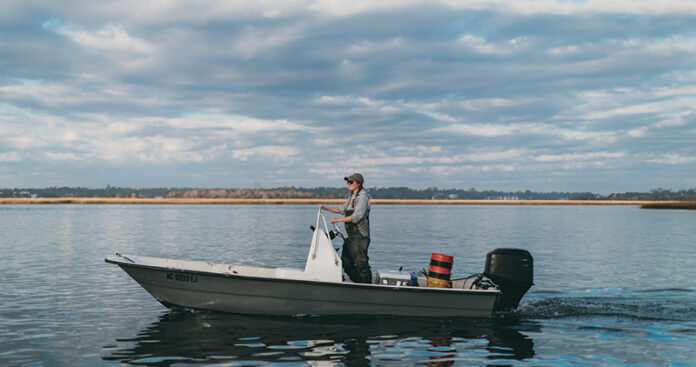 A Wrightsville Beach fisherwoman distributes fresh seafood from coastal marshes to top restaurants across the state.

Winter in the marshes of Masonboro Island: Cold, clear water flows out to the sea through winding tidal creeks, exposing the roots of the umber-colored salt-marsh cordgrass as oysters lie asleep in their beds. The crisp air is tinged with the brine-sweet smell of marsh mud; there’s no sound but the distant roar of the waves against the beach, the occasional crack of the pistol shrimp and the cascading call of the willet — not silence, but the absence of noise. In the eastern sky, the sun hides behind clouds whose rippled textures mirror the surface of the water on this windless morning.

This is the office of Ana Shellem, owner and operator of Shell’em Seafood, commercial fisherwoman, and queen of the salt marsh. She sells seashells not just by the seashore but also to top restaurants across North Carolina. If you’ve dined at Fin & Fino or Sea Level in Charlotte, Ashley Christensen’s restaurants or St. Roch Fine Oysters + Bar in Raleigh, or The Second Glass or Manna in Wilmington, there’s a good chance you’ve enjoyed Shell’em’s mussels, oysters, clams or stone crabs.

Shellem, 30, learned to navigate these waters shortly after moving to the area nine years ago. Raised in Tennessee and Kentucky, she started working in professional theater when she was 8 years old. As a teen, the young actor spent summers in New York City and moved there after graduating from high school. Shellem was 21 and living in Harlem when she visited Wilmington for the first time.

“I hadn’t experienced the ocean like this, ever in my life,” Shellem says. “I felt drawn to it — like a need to be here.”

She got a job as a bartender in Wrightsville Beach, where she met her now-husband Jon, who lived on a sailboat, and has stayed ever since.

Masonboro is a barrier island, only accessible by boat, about 5 miles southeast of Wilmington. On this bright morning, Shellem is gathering mussels destined to become part of paella this evening at Ceviche’s, a favorite local restaurant. Many fishermen have trouble selling mussels — the general public doesn’t know how to cook them — and they often get overlooked. Shellem figured out how to get around this problem by selling directly to chefs and essentially made the market for them in North Carolina. Now, they are one of her staple harvests.

In boots, waders and braids, Shellem forges fearlessly through the grass, taking in textures, colors and subtle differences in soil composition to help her track down what she searches for. She zeroes in on a cluster tucked deep in the grass. A single, fluid well-practiced motion with her hori-hori knife, and she rises up, a wide grin on her mud-flecked face, a cluster of mussels in her gloved hand. She delicately places them in her bucket and is already off in search of more.

Today, the work goes easily. But there are days when the northeast wind blows strong, the tide doesn’t drop and the marsh hides her face. There are frosty mornings in winter when her gloves are frozen solid; there are sultry summer evenings when no-see-ums feast on any exposed flesh. There are long days of big orders to fill when her body aches from bending and from lugging heavy buckets of shells through the sucking mud back and forth to her trusty gray skiff, affectionately named Marsha. There are thunderstorms. There are duck hunters with shotguns and poor eyesight. There is the increased frequency and intensity of hurricanes. Two years ago, Hurricane Florence almost destroyed what she had worked so hard to build. She couldn’t harvest for six months. But business slowly came back, like the tide whose rhythms she has built her life around.

After four years of business and with more than 30 clients across the state, the other, mostly male fishermen now take her seriously. They have learned that she isn’t going anywhere.

Her clams, mussels, oysters and stone crabs, however, are going places — and fast. Whereas many fishermen sell their harvests to a wholesaler — they can sometimes be driven all the way to Georgia before ending up on a plate in Charlotte or Raleigh — Shellem personally delivers each order to her clients, often within 24 hours. She enjoys the satisfaction of working directly with chefs, knowing that if she worked with a distributor, the product would likely spend days sitting on a truck.

That speed makes the difference, according to Sunny Gerhart, owner and chef at St. Roch Fine Oysters + Bar in Raleigh. Gerhart has been buying Shellem’s harvest since she started the business.

“The cool thing about Ana is she’s not trying to sell 10,000 bags of oysters,” Gerhart says. “She works with the folks she works with. If I say I want three bags, she’s going to harvest me three bags, and that’s it. The quality is there, and it’s super fresh coming right out of the water. We’re getting it the same day — she’s harvesting in the morning, and then she’s on the road.”

With oysters this fresh, Gerhart says it’s best to serve them raw, on the half shell, perhaps with a little mignonette. He sometimes experiments with smoking and preserving the clams and mussels, echoing the culinary tradition of the Basque coast of Spain. Still, he keeps the preparations simple to highlight the flavor of the produce and the hard work that goes into it.

“It’s a beautiful product on its own, but it’s really taken care of by Ana,” Gerhart says. “She’s a steward of the coast, doing her thing, bringing that stuff to us. We’re just trying to showcase what she’s doing, what the coast is doing.”

Shellem’s harvests sometimes end up in places other than restaurants, too. Free Range Brewing in Charlotte has created its popular Sea of Companions brand with her oysters since 2018.

Art and chemistry combine in creating this rich wintertime porter, with notes of salted chocolate. A malty backbone of roasted oats and wheat is blended with a touch of hops to add balance and bitterness. Each 200-gallon batch includes more than 600 oysters, boiled in the wort like a stew during the last stage before fermenting.

“As the beer is in the kettle, we recirculate it through a separate vessel with the oysters in it,” Alexander explains. “That allows us to fully cook the oysters, which causes them to open so they release their liquor inside. It allows us to break down the meat and release some proteins, which contributes to the body of the beer, and it allows us to strip some of the minerals from the shells, which enhances the flavor of the beer.” Shellem’s Mussel Beach, a stout made with ribbed mussels harvested by Shellem, will be released later this spring.

Wherever her harvest ends up, it always points back to this marsh, to one hardworking woman and a dream. Our day out here is coming to a close — time to head home and wash the mud out of these pants — but Shellem will be back out here tomorrow, and the next day, and the next. The pull of the moon on the tide pulls her, too. Even on days she doesn’t have orders, she often finds herself on a busman’s holiday, back out in the marsh, exploring new spots or just pausing to appreciate the beautiful surroundings.

“I didn’t start [fishing] for the money,” Shellem says. “I started because it made me happy.” Out here, amid the grass and the mud and the water and the sky, it’s easy to see why. ■ 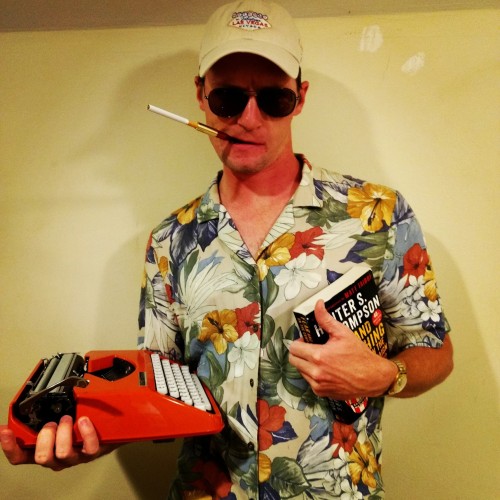