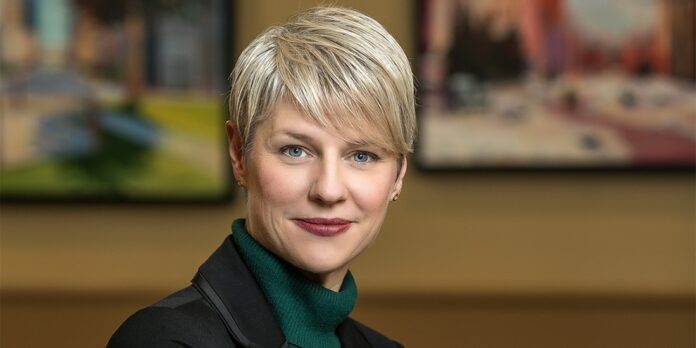 In March, Adrienne Cole took the helm of the Greater Raleigh Chamber of Commerce, becoming the first woman to lead the business-development group. She succeeded former CEO Tim Giuliani, who resigned in January after a year and a half in the position to return to his home state of Florida. After a national search, the group tapped Cole for the job. Cole worked at the chamber from 2004-2011, then left for a stint in business development for global construction firm Lend Lease. In 2014, she returned to the group as executive director of Wake County Economic Development, a chamber program. In her new job, Cole’s work has expanded to include education, transportation and government affairs.

Cole recently spoke with Business North Carolina about her work at the chamber, the importance of collaboration and future plans.

Prior to Giuliani’s brief tenure, Harvey Schmitt led the Raleigh Chamber for 21 years. “I can’t say enough about him,” Cole says. “[Schmitt] set into place a lot of the formal and informal structures” that led to the spirit of collaboration among local and regional economic-development groups. That joint effort is essential in economic development, according to Cole. “This work is a team sport,” she says. “We are very deliberate in working together, not duplicating efforts and coming together to provide companies with the information and resources they need to be successful. Whether that is in the site-selection process, helping an existing company grow or helping a company find the talent they need, we work collaboratively with municipal, regional and statewide organizations. It is very intentional.”

Earlier this year, the Charlotte Chamber launched an initiative to engage younger members, including a renewed focus on social media and low- or no-cost membership plans for entrepreneurs. Cole says the Raleigh Chamber doesn’t have immediate plans for a similar effort, though the group is working on some new initiatives “in the entrepreneurial space.” It’s important to strike a balance of keeping longtime chamber members happy while providing services aimed at attracting younger members, she says.

Staying motivated amid a hot economy

Running a chamber in a market as hot as Raleigh sounds easy, yet Cole says it’s no time to slack off.

“We have to work harder than ever to make sure we’re making the right investments for our future so that we can maintain our momentum,” she says. Chamber initiatives include economic development, talent recruitment and supporting small businesses. “I think the role of cities and chambers of commerce are more important than ever in moving these important initiatives forward, in bringing people together to collaborate to get things done and to maintain focus on the issues that will be important for our future,” Cole says.

“I don’t think that complacency is in my DNA.”

DURHAM — Dova Pharmaceuticals raised $75 million in an initial public offering. The company acquires and develops drugs for rare diseases. Its leading product is a treatment for patients with chronic liver disease. Its biggest shareholder is PBM Capital, a Charlottesville, Va.-based investment firm.

DURHAM — Johnson Akinleye was named the 12th chancellor of North Carolina Central University. He succeeds the late Debra Saunders-White, who resigned in August 2016 and died in November following a battle with kidney cancer. Akinleye had served as interim chancellor since January; he previously was provost and vice chancellor for academic affairs.

FOUR OAKS — United Community Banks, based in Blairsville, Ga., will acquire Four Oaks Fincorp for about $124 million. The parent of Four Oaks Bank & Trust has 14 offices in eastern and central North Carolina and assets of $737 million as of March 31. The deal is expected to close in the fourth quarter.

RESEARCH TRIANGLE PARK —  G1 Therapeutics named Andrew Witty, former CEO of GlaxoSmithKline, to its board of directors. The cancer drugmaker raised $108 million in its May initial public offering.

Photo provided by the Greater Raleigh Chamber of Commerce