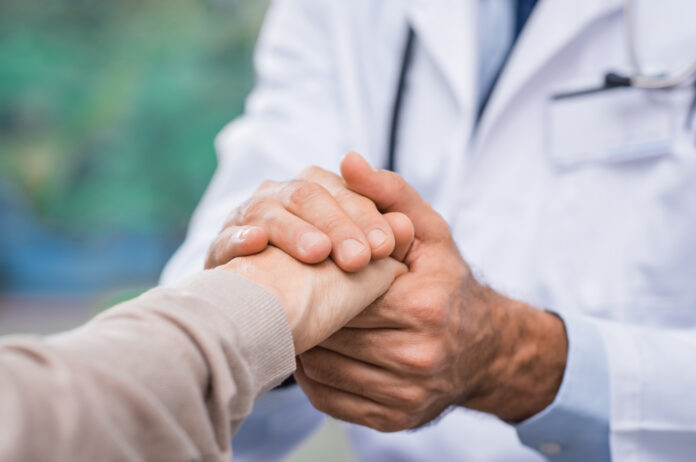 A veteran Charlotte physician pushes back on corporate-owned health care

Why, he gently chides her, did you wait so long to come in? The woman gazes sternly at the young Charlotte doctor. “To be honest,” the patient says, “I don’t want to see you, but since I’m here, I guess I’ll go ahead.”

Through the birth of her two children and death of her first husband, the doctor’s predecessor had been like family. But that doctor had retired, and she’d let her blood-pressure medicine lapse.

It was the 1980s and her new doctor had recently earned an internal medicine degree from East Carolina University’s Brody School of Medicine. His emphasis was on primary care, the front lines of health care and preventive medicine such as controlling hypertension.

Dr. John Sensenbrenner grew up in Union County and earned a bachelor’s degree at Lenoir-

Rhyne University. He has the persona of a pastor — understandable, considering his Lutheran conviction that medicine is a religious calling. His given names, John and William, were also those of his family doctor, only one of two in the county at the time, who had delivered him and cared for him until he entered college.

The doctor’s patient, Carolyn Dunn, is 82 now. She still drives nearly 30 miles through Charlotte traffic as she has done for years, past scores of other physicians’ offices, to see Sensenbrenner. “Friends ask me why,” she says. “Well, he’s like family.”

In the airy waiting room, the receptionist greeted her by her first name. During an exam, she playfully patted her stomach and asked the doctor, “Is this fat?”

More than 35 years after they first met, Sensenbrenner, 65, looked up from her chart. With characteristic candor he turned up his mustache at the corners in a smile. “Yes,” he nods. “I got the message,” says Dunn, who wouldn’t have medicine any other way.

Sensenbrenner and his primary care clinic are outliers in today’s health care. In 2004, he rebelled, dismayed at what he says was the shifting focus of the hospital-owned clinic where he was employed “from quality care to the bottom line.”

He chose to practice medicine alone, in the shadow of giants. Eighty percent of his patients followed, and his independent business now counts 5,000 people on the rolls.

In 2021, the American Medical Association says more doctors were employed by large health care organizations, including private-equity firms, than practiced independently. The AMA says the split is 51% vs 48%, though some experts say corporate ownership is actually much higher.

Independent doctors like Sensenbrenner scoff. They say their approach leads to better treatment outcomes and lower burnout rates because there is less pressure to shorten the 30-minute visits to which Carolyn Dunn says she’s accustomed. National studies show employed doctors average less than 10 minutes per patient.

Sensenbrenner sees about 10 patients a day, many of whom belong to MDVIP, an $1,800-per year subscription program that focuses on wellness and prevention, says Tristan Samson, who manages the clinic. It operates in a two-story red-brick building that Sensenbrenner has owned in southeast Charlotte since 1984.

As for compensation, independent doctors make more than their peers working for health care systems and private groups, according to the 60,000-member Medical Group Management Association. The Colorado-based trade association focuses on the business of medical practices.

Doctors in primary-care practices such as Sensenbrenner’s averaged about $305,400 in compensation in 2021, versus about $283,500 for those who do not have an ownership stake, the group reported. The independent doctors had an average of 240 paid hours off compared with 226, and averaged 200 vacation hours, 40 more than employed counterparts. 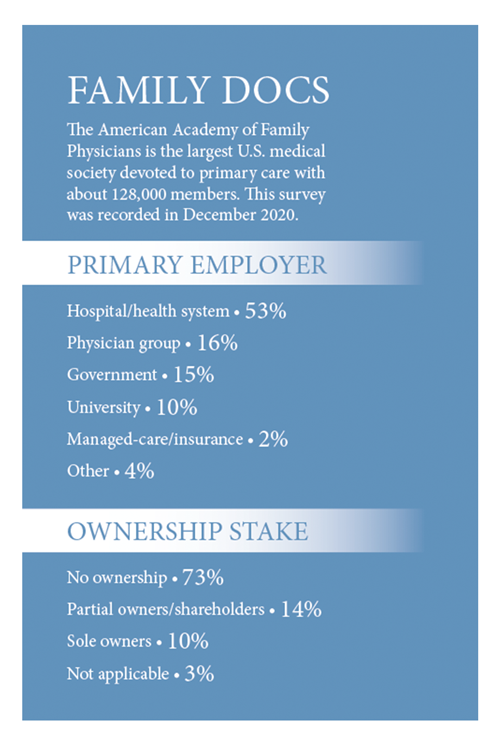 Cardiologist Dale Owen was among 88 doctors who quit Charlotte-based Atrium Health in 2018 to form Tryon Medical Partners. He’s now CEO at Tryon, which has grown to 11 clinics, 105 doctors and 185,000 patients.

Owen recalls when he first told patients he was going independent. “I went out in the waiting room and shook everybody’s hands and told them,” he says. “They all stood up and clapped and cheered. Patients wanted to feel like they were important again.”

By comparison, UNC Healthcare employs 7,000 physicians, while Novant Health has about 1,800. Atrium Health will employ 7,600 physicians in the Carolinas, Illinois, Wisconsin, Georgia and Alabama pending completion of its merger with Wisconsin-based Advocate Aurora Health, a spokesperson says. The combined systems report about $27 billion in annual revenue.

Owen says significant pressure for physicians to see more patients prompted his move to help start an independent group. “You felt rushed all the time. If the patient has multiple issues to deal with, the physician doesn’t have time, so he winds up sending out a lot of referrals.” The referrals were to specialists who were also in practices owned by the hospital system.

“Referrals then create a lot more testing and more testing drives up the cost of care,” Owen says. “This country has the highest health care costs in the world by a factor of two and yet
we are just barely in — or even just outside — the top 30 in outcomes. In what other business would somebody with the highest cost and nowhere near the highest quality survive?”

It’s been 11 years since President Barack Obama signed the Affordable Care Act into law. Like many Tar Heel doctors, Sensenbrenner was strongly opposed and feared that the ACA would give government officials too much power over health care decisions.

At the time, Sensenbrenner recalls hoping Eric would enter the medical field but was solemn about the industry’s future. “I’d like for my son to be like that, but in his mind, I know he’s saying, ‘Will I be able to follow in my dad’s footsteps, or will I just become another government doctor?’” (His elder son, Adam, manages professional musical groups.)

More than a decade later, fears over the negative impact of Obamacare have eased for Sensenbrenner, Owen and, according to CEO Chip Baggett of the N.C. Medical Society, many other doctors.

“Ten years ago, the Affordable Care Act was a brand-new thing,” Baggett says. “The federal government had never really jumped into the middle of health insurance except for Medicare, and none of us were certain what was going to happen.”

Obamacare mandated virtually everyone hold some form of insurance. Now, more than 25 million additional Americans are insured. Young people can remain on their parents’ insurance plans until age 26 and insurers can no longer cancel a policy if it’s found the holder’s illness existed before he or she was insured. 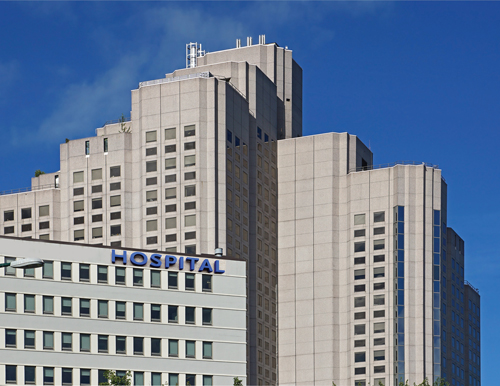 uninsured, less than half the percentage in 2010. It credited Obamacare, the Medicaid expansion, subsidies for insurance in the open market and the preexisting-condition provision, which prohibits insurers from denying coverage in many instances.

“We all know insurance is the ticket to good care earlier, when physicians can intervene instead of waiting until someone is at a more advanced stage,” Baggett says. “So that has worked out well.”

On a recent afternoon, Sensenbrenner weighed the decade since the birth of Obamacare. Rapid advances in diagnostic procedures such as MRIs and genetic testing enable doctors to replace faulty heart valves without open-heart surgery and diagnose tumors even before a patient has symptoms.

Carolyn Dunn was treated successfully for breast cancer in 2016. “It was very small, and [Sensenbrenner] caught it very early,” she says. “I’d been a good girl and had mammograms like I was supposed to.” Even after referring her to an oncologist, he followed her treatment step by step. “He went above and beyond what most doctors would do.”

The requirement that all be covered by some form of insurance and the steady consolidation of hospital groups are also concerning.

“You now have a national law that requires people to purchase something, in this case, insurance,” Sensenbrenner says. “This gives immense power to the health insurance industry, which is doing more and more to try to direct physicians on how they care for their patients.”

Unfortunately, a decade of ACA hasn’t slowed the pace of health care spending. North Carolina’s decision to block expansion of the program to include residents covered by Medicaid means the state has more uninsured adults between 19 and 64 than all but six states, according to The Commonwealth Fund, a nonprofit that tracks health care issues. The state ranks 37th in health care access and affordability, according to this year’s study.

A provision in the ACA, the medical-loss ratio, requires insurers to pay at least 85 cents of each dollar of premium collected. It was expected to slow health care cost inflation. Instead, it prompted some providers to raise charges in order to maintain profit margins. “In order for that 15% to get bigger, the 85% needs to get bigger as well,” says Chris Meekins, a health policy analyst for Raymond James Financial Services.

Mandy Cohen, perhaps the state’s best-known health care expert, shares many concerns of the independent primary-care doctors. She trained in internal medicine, then served in public health roles, including as the secretary of the N.C. Department of Health and Human Services.

After gaining recognition for leading the state’s fight against COVID-19, in January she became executive vice president of Bethesda, Maryland-based Aledade, which partners with medical practices to improve services and patient care and boost revenue. She is based in Durham, and the company works with about 250 practices in North Carolina.

“Instead of thinking that the only way in primary care to earn more is to do more, we focus on activities that are going to keep folks healthier and out of the hospital,” she says. Aledade compiles databases on best medical practices that rival corporate hospital systems.

“The proof is in the pudding — physician-led practices are more successful at keeping folks healthy, so they show savings overall,” Cohen says. “Practicing in a value-based context allows you to get off the fee-for-service hamster wheel that rewards you for doing more and instead, rewards you for your patients doing better.”

Amid perhaps the most tumultuous period in modern medicine, John Sensenbrenner ponders the changes he’s seen over his career. His clinic closed briefly at the start of the pandemic but quickly reopened when it became apparent that many patients weren’t prepared for telemedicine visits.

“When someone calls and needs me, I’ll see them,” he says. “If God needs me, he can surely find me. It’s my job to minister to my flock.”

Sensenbrenner is proud that Eric, after flirting with a specialty in orthopedics, is now focused on primary care, treating adults with complaints from hiccups to end-of-life illnesses.

“I think he realizes nobody practices much like we
do anymore.” ■