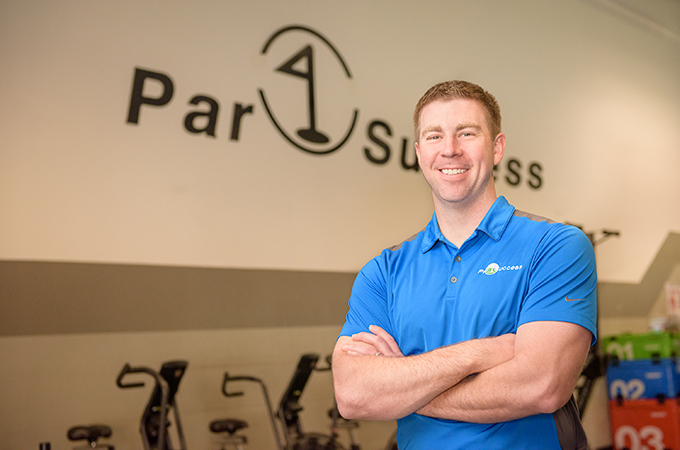 Every fledgling business owner needs a break. Physical therapist Chris Finn’s came in 2013 when Karl Kimball, the golf professional and co-owner of Hillandale Golf Club in Durham, asked for help with a nagging back problem.

Finn was looking to build Par4Success, the golf fitness and physical-therapy practice he launched a year earlier. Initially, he operated out of his Mazda3 sedan. His marketing plan included calling on every Triangle golf pro who would see him.

“We got Karl down on the floor of his office, relieved some of the muscles that had been spasming, and gave him some basic exercises to start using the correct muscles and calm down the others,” Finn says.

Kimball was so impressed with the results that he offered Finn the use of a 400-square-foot shed at Hillandale for $300 a month. It became a treatment and workout facility.

“Clients could come to me,” Finn says. “I didn’t have to drive all over the place with a treatment table in my car. We installed some turf, a table and some workout equipment. It grew from there.”

Now, Finn is tweaking blueprints for a 10,500-square-foot facility in Morrisville that he will own. It will be double the size of his current leased facility, also in Morrisville.

“Back when I started, no one knew what the heck I was doing,” says Finn, 35, who caught the golf addiction in 2009, the year he earned a physical-therapy degree at Springfield College in Massachusetts. “It was not only a marketing problem, but it was an education program. There was no ‘golf fitness.’ Now, you see all the pros work out. Back then, it was, ‘What? You do what? Who does that?’ It was tough in the beginning.”

Golfers have always obsessed about swing mechanics, owning the latest clubs and playing the longest balls. Now they’re more inclined to embrace the missing links of strength and flexibility. Finn is well-positioned after Golf Digest listed him among its Top 50 golf fitness professionals in 2020.

The Par4Success protocol is built on on-site and virtual consultations with Finn and his staff of nearly 20. The process begins with a 90-minute assessment of core metrics such as a vertical jump, the length of a two-handed medicine ball throw, and how far one can rotate the neck, shoulder and hips.

An initial customized three-month program typically starts at about $1,000, with clients averaging more than three years of contact with Finn’s team.

“A typical client aims to gain swing speed, maximize how long they can play the game or get out of pain,” Finn says.

Finn and his associates are self-professed “data geeks” who have gathered and analyzed information on thousands of client-golfers. They can compare how a 57-year-old male golfer matches up with age-group peers.

“We know that squatting, hinging, deadlifting, and pushing and pulling strength are the numbers that matter,” Finn says. “If you’re below the benchmarks, you’re probably not enjoying your golf to the degree you could.”

From that assessment follows a training program with workouts at the Par4Success facility or in a gym or home facility with exercises built around the available equipment.

“Over the course of 12 months, a guy over the age of 50 can gain six to nine miles an hour, translating to 18 to 22 yards more distance off the tee. That’s significant,” Finn says.

Cary’s Katherine Perry-Hamski joined the LPGA Tour in 2017 and began working with Par4Success to repair a wrist injury. That morphed into a strength and flexibility regimen. She went from 94th in driving distance at 250 yards in 2018 to ranking 29th a year later when her drives averaged 267 yards.

“Courses started to seem more score-able, and I felt like my body didn’t fatigue or hurt as much,” says Perry-Hamski, whose treatment evolved over the next year to build overall body strength during pregnancy. “Chris and his staff have helped me strengthen my body, gain distance, achieve swing changes because of increased mobility and prevent pain.”

Today, Finn’s home course is Old Chatham Golf Club, an exclusive club between Cary and Durham that opened in 2001. Old Chatham was one of the first venues where he started offering services. Finn landed a client there, getting a $1,000 monthly retainer to treat the man once a week for seven months.

“I used to bring a treatment table into the locker room one morning a week to treat the guy,” he says. “Now I sit on the same bench changing my shoes where I used to make notes and give a consultation. It’s kind of surreal.” ■