The roar of the FedEx hub’s cargo jets awakens westside Greensboro from a sleepy Saturday morning ideal for soccer practice, golf and postponed winter trips. “Fly easy,” Piedmont Triad International Airport tells its travelers. But on this April day, few were flying at all.

Because of the global coronavirus, nine out of 10 Americans were under lockdown orders, and American, Delta and the airport’s other carriers were parking jets. By sundown on April 18, Kevin Baker, the airport director, counted 75 passengers, a 98% decline from the same day in 2019. The airport carries nearly 2 million in a good year.

“That is about what we normally have on just one regional jet,” he says. “How bad is that? ‘Catastrophic’ is the word that comes to mind.”

The story was similar at Charlotte Douglas International Airport, which saw a record 50.2 million passengers last year, or Raleigh-Durham International Airport, which counted 14.2 million passengers. By mid-May, CLT was counting only about 5% of its usual passengers, says Brent Cagle, city of Charlotte aviation director. American Airlines, which averaged 653 daily flights in 2019, trimmed its service to 271 then added a couple more flights by early June. It expects to average 415 flights in July.

At RDU, President and CEO Michael Landguth cringed as volume sagged to 4% of the previous year’s traffic. American had 10 RDU flights in late May, down from 45 a year earlier. The airport has slashed its current fiscal year budget and pared $110 million from its capital budget. RDU has invested $1.5 billion in expansions over the last decade, with plans to spend $4 billion over the next 25 years. z

“Airports are volume-based businesses,” Landguth says. “When customers don’t come through the front door, you’re not going to get much income.”

The devastating statistics underscore a brutal truth gripping North Carolina’s aviation industry. The COVID-19 pandemic is delaying as much as $4 billion in spending at the state’s 10 commercial airports and forcing airport authorities and other governing bodies to slow or rethink expansion. It’s triggering accounting scrambles as CFOs rejigger billions in debt, and it’s bringing the once sky-high optimism that marked the state’s aerospace future back to earth.

Ultimately, say airport managers, airline executives and industry analysts, it may change the face of aviation in ways similar to the societal shifts brought about by the 9/11 terrorist attacks.

By year-end, the coronavirus pandemic will affect as much as 40% of the state’s $52 billion annual aviation and aerospace economic impact, says Bobby Walston, director of the N.C. Department of Transportation’s Division of Aviation. That’s more than $21 billion.

“If you take the traffic and revenue away, you take the impact away,” he says. “How many passengers come and go, there’ll be a proportionate reduction in revenue, though not quite one to one.” That’s because of some bright spots such as the state’s booming business of aircraft maintenance industries. Companies such as Greensboro’s 2,000-employee HAECO Americas are being buoyed as airlines perform heavy upkeep on planes grounded during the crisis.

At PTI, Baker says renovation of two concourses, at an estimated cost of about $60 million, is on indefinite hold until the path of the coronavirus becomes clear.

Charlotte Douglas, which ranked as the world’s 32th busiest airport by traffic count in 2019, is charging ahead. Cagle says a $600 million terminal lobby expansion project started last October remains on track. It’s part of the airport’s $3.1 billion Destination CLT master plan, which sets out projects through 2035.

In early June, CLT pared more than 7% of its $200 million annual budget and suspended hiring. It had not laid off any of its more than 750 employees, partly because terms of the federal bailout funds received by Charlotte Douglas blocked recipients from dismissing staff. Likewise, American agreed to retain its employees, who number about 12,000 in Charlotte, until at least August under the federal assistance program aimed at sustaining the transportation industry during the pandemic.

Employees of private-sector contractors at CLT weren’t so lucky. More than 700 people were laid off from restaurants, convenience stores and other concessionaires, according to the union representing the workers. Enterprise Rent-A-Car also laid off about 90 at its CLT location.

Because of the crisis, the strengths and vulnerability of the state’s aviation industry are getting a rare public examination, one that shows its impact far beyond the 72 publicly controlled airports that dot the state. A recent N.C. State University study concluded those airports support more than 300,000 jobs, $12.6 billion in personal income and $2.2 billion in state and local taxes. Cessna, Honda Aircraft, Lockheed Martin, Spirit AeroSystems, GE Aviation and others have outposts in the state, helping make up the second fastest-growing aerospace manufacturing economy in the nation. More than a dozen airlines and two dozen cargo carriers operate here.

On a recent late-May day, Charlotte Douglas International provided the most vivid glimpse of the pandemic’s impact. There were still passengers, but so few, an outsider would have had trouble believing 50 million crowded through here in 2019. Or, that in the 1980s, when Charlotte Douglas began its dizzying climb on the wings of then blossoming Winston-Salem-based Piedmont Airlines, it had fewer than 3 million yearly passengers.

Now, its terminal is the size of two typical shopping centers — almost 2 million square feet — and it has more than 100 gates. Pre-pandemic, more than 18,000 people worked here, contributing $23 billion annually to the state’s economy, says Walston, the state aviation director.

“For us, we’ve had a huge decline, but even at our low point, we’re seeing 10,000 to 15,000 customers a day,” Cagle said in early June. “For the last 10 days, we’re been gaining ground, and right now, we’re probably at 85% to 86% reduction. Sometimes small victories are still victories. Even though we’re at diminished levels, at least for now we’re confident we’ve hit the bottom and started the climb back.”

CLT’s finance model is similar to that of many other Tar Heel airports. It is owned by the city and had $379 million in total revenue in 2019 with terminal rents, concessions, parking and passenger facility charges each accounting for about $60 million. More than 90% of its traffic stems from American, which is one of the Charlotte region’s largest private employers. It’s also the airline’s second-biggest hub behind its operation at Dallas/Fort Worth International Airport.

RDU, which is part of a regional authority, gets more than a third of its revenue from parking levies, with the balance from fees on airlines for landings and takeoffs and various concessions. Financial issues are rare at the two big N.C. airports, which receive little or no local government support. At Raleigh-Durham, Wake and Durham counties and the cities of Durham and Raleigh each kick in $12,500 a year. Total revenue totaled $252 million in 2019, including about $60 million each from parking and terminal rent and fees.

Rapid growth at the two big airports has led to long-term debt of $700 million at Charlotte Douglas and $500 million at Raleigh-Durham. Both have strong investment-grade credit ratings, and they’re benefitting from $135 million and $49.5 million, respectively, from the federal Coronavirus Aid, Relief and Economic Security Act. That, along with the $16.4 million going to Piedmont Triad, makes up a bulk of the $284 million in airport aid received by the state. The money is being used to pay debt service and some operating costs, executives say.

The virus emerged as American was forecasting solid growth at Charlotte in a comeback after the world’s largest airline struggled last year, hampered by discord with its mechanics union and the grounding of the Boeing 737 Max. It was boosting daily departures, adding gates and replacing aircraft with bigger jets.

Instead, the airline slashed capacity globally by 80% in April and May and 70% in June, while retiring about 100 widebody airplanes such as the Boeing 777, which have been mainstays on intermediate mileage overseas routes. CEO Doug Parker told analysts in May that he expects the airline industry to shrink by a fifth by summer 2021.

A full recovery for Tar Heel and other airports may be years off, though changes will appear before then. Already, several airport managers are flipping a longstanding practice of cleaning terminals in off hours, and inconspicuously.

“We’ve always had rigorous cleaning standards, but in a noninvasive way,” says Charlotte’s Cagle. “Now, frankly, with COVID-19, passengers want to see it, so we are no longer trying to be invisible.”

In Charlotte, Raleigh and elsewhere, airports are ginning up ways to reward passengers for avoiding contact with each other and staff members. Auto license readers might be used to identify and expedite arrivals and boarding, and instead of surcharges for credit-card purchases, they might offer rebates for cashless transactions.

Airport expansion designs might morph, too. For example, more gates might be needed to handle additional flights for the same or reduced numbers of passengers, if social distancing rules on planes are tightened. The real revolution might be in technology rather than architecture. Some managers foresee health screening, similar to TSA security screenings, except with the ability to instantly detect illnesses. 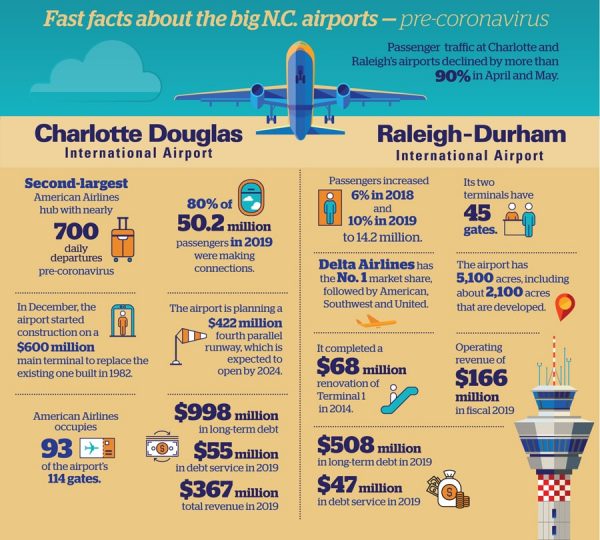