Tim Gestwicki has been a leader at the North Carolina Wildlife Federation for more than two decades. The nonprofit is the oldest and largest statewide conservation organization. It was established in 1945 and is dedicated to protecting, conserving and restoring wildlife and habitat in North Carolina by inspiring nature stewards, recommending conservation policy, and engaging volunteers to make a difference. 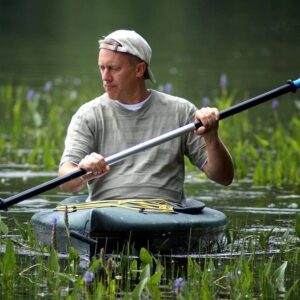 Starting as a field canvasser for the organization in 1991 and eventually becoming CEO in 2009, Gestwicki has grown NCWF from a budget deficit organization to revenues of more than $1.5 million annually. Under his leadership, more than 15 community chapters have formed, Great Outdoors University serves more than 20,000 youth a year, 30,000 acres of pollinator habitat have been restored, and more than 60,000 meals of ground venison per year are served to help feed the hungry through NCWF’s Farmers and Communities Manage Deer program in partnership with community food banks. He is often seen testifying in front of elected officials or happily sitting in a duck blind. He is from Charlotte and a graduate of UNC Chapel Hill.

I enjoy the variety and the people I am fortunate to work with. Since NCWF is a large umbrella, big tent organization, we work on every species and every type of habitat across North Carolina. From western high country peaks to Piedmont parks and eastern cypress-ringed swamps and from outdoor pursuits like hunters and anglers, birders, paddlers and backyard gardeners,  North Carolina is blessed with a diversity of natural resources and ways to enjoy them. I also enjoy working with all people from all political stripes as there are no Republican largemouth bass nor Democratic monarch butterflies. In addition, I am fortunate to be surrounded by the best non-profit science-based staff without question in the country.

I get inspired for the work at hand by the bugling sound  of an elk in Cataloochee, the howl of one of the last remaining red wolves found in the wild — found only in northeastern NC — and from the delight of a kid catching their first fish. We have a mantra at North Carolina Wildlife Federation that every acre and every species matters. To accomplish impactful conservation outcomes now and for future generations of North Carolinians, it really takes a conservation network. What inspires me most is the dedication of our hundreds upon hundreds of volunteers who are out there across the state every day, planting trees, mentoring children, educating local legislators, building wood duck nesting boxes, gardening for wildlife, monitoring sea turtle hatchings, and cleaning our waterways of garbage. That inspires me!

Who or what should we be paying attention to?

Marine fisheries!  HB483 “Let Them Spawn” passed the NC House, which is historic given the fisheries battles over the decades in NC. This legislation offers a straightforward approach to address the current inertia obstructing  fisheries management in North Carolina. It applies  simple fishing rules that establish minimum size limits or slot limits for several recreational and commercial fish species in critical decline.  The bill establishes a minimum size limit for historically significant marine fishery species to ensure that 75% of the juvenile fish reaching that size are mature and have the opportunity to spawn at least once. Using the 75% maturity threshold for minimum-size limits will guide the process of fishery management plan development.

North Carolina boasts 2 million acres of estuary — the rich, fertile nursery grounds required by so many fish and shellfish species — more than any other state in the Lower 48 other than Louisiana. The bedrock policy to ensure that fish stocks have the opportunity to spawn at least once will significantly — and quickly — add to the populations of declining fish stocks. A healthy spawning class of adult fishes will increase yield and subsequent resiliency and growth of the fishery to the benefit of all user groups.

North Carolina has seen severe declines in landings and other measures of stock health demand immediate action. In the past two two decades, commercial landings have plummeted for many species such as Atlantic croaker (85% decline), kingfishes (54% decline), striped mullet (47%), and spot (94%). The other two species contained in the bill, southern flounder and bluefish, have seen landings decline by 88% and 78% respectively since 1997.  During 1997, total commercial landings for thesix  species contained in HB483 were 24.7 million pounds compared with 5.2 million pounds in 2018. That is a 79% decline.

Commercial interests continue their decade’s long opposition to any bill that mentions fish offering the same hyperbolic lines about this being the ending of fishing in North Carolina and resorting to typical methods of deny, defend, deflect and delay. That is why our fish stocks are in the dismal shape they are in.

Fortunately, a majority of House members were able to drown out the noise and adopted the bill on the basis of  its scientific focus on enhancing the fishery resource and not kowtowing to the typical recreational versus commercial fishing battles that have derailed previous efforts to address North Carolina’s declining marine fish populations. What will be interesting is how Governor Cooper weighs in as his campaign platform on this issue was very encouraging https://www.roycooper.com/marine-fisheries/ yet his Department of Environmental Quality and Division of Marine Fisheries oppose this simple  resource bill. We think it is a remedy founded on the most science-based, culturally sensitive, and economically resilient thinking ever put before the state legislature. The matter now moves to the Senate.