Sara Rose Harcus is a former chemist, entrepreneur, and a urinary tract infection expert. After losing a grandparent who endured a chronic UTI, and suffering from more than 25 UTIs herself, she started Dmanna, a company that makes scientifically proven UTI products, and Tribecan, a telehealth startup using artificial intelligence and machine learning to improve patient outcomes for UTI sufferers. 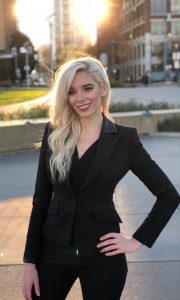 Helping people with chronic urinary tract infections get their life back.

People who challenge conventional wisdom, at any cost. Ignaz Semmelweis is a huge inspiration to me. He was the first doctor to advocate for hand washing, after seeing that it greatly reduced the mortality rate for birthing mothers. He used science and data to prove his claims, which offended doctors by suggesting that they were somehow uncleanly. For his contributions, he was ridiculed, fired, and committed to an insane asylum. Years later scientists realized he was right, hand washing has ultimately saved more lives than any other medical innovation in history. Today, Ignaz is know as the “Savior of Mothers.”

Who or what should we be paying attention to?

Over 30% of all antibiotics are prescribed for UTIs, and they’re not working anymore due to antibiotic resistance. In 20 years we won’t have any antibiotics to treat UTIs. Women and children will be disproportionately affected, so we need to address this now while will still have time. UTIs will be way more deadly than climate change over the next century, but no one seems to realize it.

The second biggest issue with UTI antibiotics is that they have harmful side effects, they are not like an ibuprofen pill you can take whenever. They are more like chemotherapy: all antibiotics have unwanted side effects, and should only been used when every other option has failed. For example, the antibiotic I was prescribed to take daily, Macrobid, gave me kidney stones that turned into a septic infection. Yet, I prescribed it without warning or consequence.

We’re finalizing a new product line, and pulling the trigger takes a lot of consideration. I’m used to the software world where if you launch something with a bug you can go back and fix it in ten minutes. With CPG products, bugs are expensive if not impossible to fix.

Whatever kind of barbecue that Mission BBQ serves.