Ernst & Young LLP — better known these days as EY — this week officially opened its sprawling “wavespace” design studio in Charlotte’s South End neighborhood. The 40,000-square-foot space occupies two floors in the RailYard development, where other tenants include WeWork and Allstate. One of 20 EY wavespace locations worldwide, the center encourages collaboration among designers, technologists and product managers, among other roles. 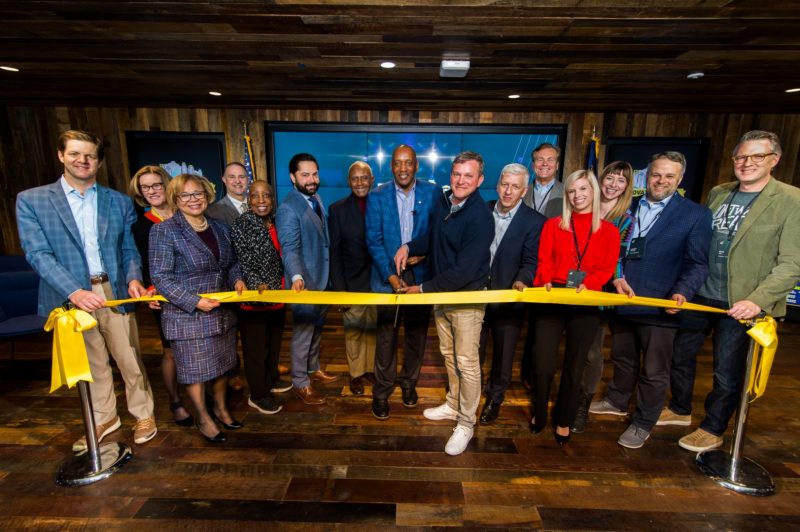 The concept started about three years ago as a way to help clients efficiently tackle challenging business problems. In addition to serving clients, EY anticipates the Charlotte center will serve as a hub for innovation for community groups, nonprofits, startups and large corporations, according to Brad Wallace, a Fayetteville native and N.C. State grad who is a principal for digital advisory at EY. He joined the company in 2012.

EY opened its first Charlotte office 61 years ago — the London-based advisory firm has 1,600 workers in the Queen City after adding more than 1,000 jobs over the last seven years. The new center will employ 375 people; 210 of the positions have already been filled.

We spoke with Wallace to learn more about the new space, which was designed by Perkins & Will, and about Charlotte’s budding technology community. Comments were edited for brevity and clarity.

Describe your involvement in bringing the wavespace concept to Charlotte.

Our main office is [in downtown Charlotte], but I spent a lot of time going back and forth to New York building the original one of these — we actually started our digital practice a little over five years ago, and we built our first innovation center and studio up in New York City. My plan has always been to take what we did and learned up in the Northeast and move it to the South.

The space is open to clients but also to other members of the community. How does that work?

To give an example of that, there are a lot of health care innovation groups right here in Charlotte. We actually hosted them a couple of Fridays ago, and the offer to them was, “How can EY help?” because we’re very involved in the startup community and with the entrepreneurs. But we also just said hey, we know you have groups and meetings — just come use our space. So, our vision is as much to put the community and the ecosystem together as it is to actually support our corporate side of our business.

I’m very involved in the Carolina Fintech Hub, which started about two years ago. The Fintech Hub will co-locate with us and have their events here. They’re not buying anything from us. We’re actually spending our time and money on them to help develop that ecosystem.

Is it tough to convince accounting and finance workers to relocate to a space that’s more collaborative?

You’ll notice the space is very quiet, even though it’s open. We spent a lot of time sound-dampening the space. In general, when people come over here, their first impression is, “I like the area. I like being connected to the ground [as opposed to being in a] skyscraper.” If you give them the right tools and the right environment, they’ll figure out a way to work differently.

Do you think there’s going to be a leveling out of fintech jobs in Charlotte or will it keep growing?

I think it’s going to keep growing. You have AvidXchange that was just valued at over $2 billion. I think it’s just a matter of time before some of these companies go public or, like in Avid’s case, continue to be fueled with additional investment. That’s going to create opportunity in the community as a whole. But also, there are many people within these companies that are getting experience around building startups, operating startups, scaling startups. I think that’s what’s really going to create the momentum.

People have said Charlotte struggles to scale its technology community because it lacks a major research university. Given the recent job growth in the sector, that doesn’t seem to be an issue. What is your take?

You’ve got some major tech employers here. I just don’t think that narrative has been up. At Charlotte Fintech Hub, our desire has been to tell all these university students in North Carolina about all of the tech opportunities that exist in Charlotte. I kind of relate it to football recruiting — we want to draw a line around the state and make sure that all the great students from N.C. State and Carolina and Duke, especially in those technical disciplines, actually make their way to Charlotte. Because the types of problems we’re solving for here are similar to the ones that are being solved out in Silicon Valley.