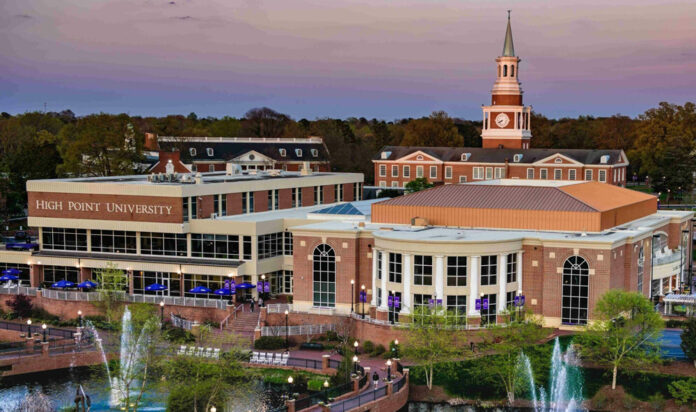 High Point University has landed a combined $100 million in pledges from three families, commitments that will undergird plans to invest $400 million over the next three years, President Nido Qubein said Wednesday.

The private university’s plans include adding a law school that will enroll its first graduates in 2024, which is High Point’s centennial anniversary. The identity of the school’s dean, who has been hired, will be disclosed in May, Qubein said at a campus event attended by more than 200 community leaders, faculty and students.

The three families live outside of North Carolina and own health, insurance and publishing businesses, Qubein said. They did not want to be immediately identified, he said.

Other plans at the campus near downtown High Point call for schools of optometry, which would be a first for North Carolina, and nursing. High Point now has a department of nursing that is enrolling its first class this fall.

The expansion continues the United Methodist-affiliated university’s dramatic growth since longtime High Point businessman Qubein became president in 2005. What was a 92-acre campus is now 520 acres, with more than 100 buildings constructed and about a dozen new schools added to three existing ones when Qubein arrived. Enrollment has grown from 1,400 to 6,000, including about 1,000 graduate students. Annual revenue totals $400 million, producing cash flow of about $100 million, the president said.

“Thanks to Dr. Qubein’s leadership, support from families such as these, operational surpluses and university revenues, no new debt will be acquired to complete the projects,” Robert Brown, chairman of High Point’s board of trustees, said in a statement.

“Our growth is truly a miracle with God’s hand on it. Students and families across the country appreciate that HPU delivers an education founded on values and framed with life skills,” Qubein said at the event.

The university also announced plans for an $80 million library, of which $35 million has been committed by a family, and a building for the School of Dental Medicine and Oral Health. Long range plans also call for new buildings for the schools of optometry and nursing.

Each building will be constructed on the High Point campus with Triad-based contractors handling all of the work, Qubein said, reflecting the university’s commitment to the local economy.

High Point’s decision to add a law school comes amid a seeming glut of lawyers, and the Triad already has similar schools at Wake Forest and Elon universities in Winston-Salem and Greensboro, respectively. But Qubein said the school will add prestige and that High Point plans for its school to operate in a distinctive fashion. It is seeking accreditation and has started hiring faculty, he said.

Qubein also said High Point has started a limited liability company to buy dental practices as a way to create clinical slots for its students and graduates. It has acquired two practices in North Carolina with plans to add 20 or 30 more, mostly within the state, he said.

Meanwhile, High Point plans a new $80 million student apartment building that will include retail space and a restaurant and a $25 million parking garage adjacent to the pending law school building.

High Point’s expansion is among the most rapid of U.S. private universities. The annual cost of tuition, housing and other fees at the university exceeds $60,000 before student aid. During a discussion with reporters after the event, Qubein acknowledged the high cost of private colleges, which he said requires High Point to provide an exceptional experience for its students. He noted that the university received a record 15,000 applications in the last year, reflecting increasing demand.