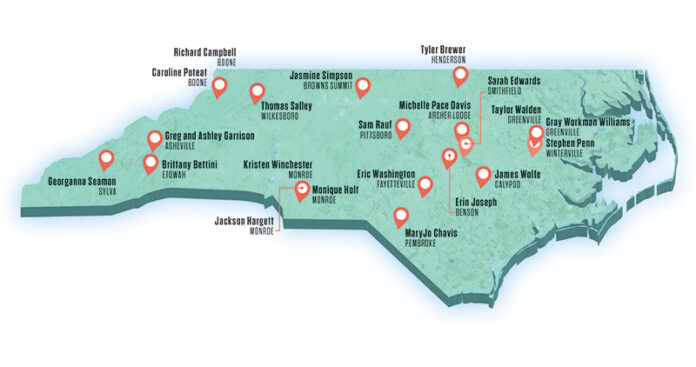 Seven years ago, veteran Raleigh political adviser Gary Pearce told our magazine that he’d “been watching plans to improve the prospects of North Carolina rural areas for 40 years and not a damned one of them has worked.” That hasn’t stopped state and local officials from making diligent efforts to improve the fortunes of rural areas.

Still, the 2020 Census showed 51 N.C. counties lost population over the last decade even as the state had a net gain of about 900,000 residents, up 9.5%. Those 51 counties lost a combined 147,000 people, with about a third of the decline occurring in five eastern N.C. counties: Robeson, Duplin, Edgecombe, Columbus and Halifax.

Fortunately, there are many people making herculean efforts to support their communities, which is why Business North Carolina annually publishes our Trailblazers feature to highlight business owners and professionals who work in N.C. towns that have fewer than 100,000 residents. We focus on people who are under the age of 40 because of their commitment to smaller communities when they could pursue excellent opportunities in the bigger cities.

This year’s roster reflects a variety of occupations including a farmer, banker, police officer and a couple operating an ice cream shop. Several economic-development officials are also profiled. Their efforts breathe life into communities in great need of promoters and champions.

Thank you for the participation of the Trailblazers and those who nominated them. 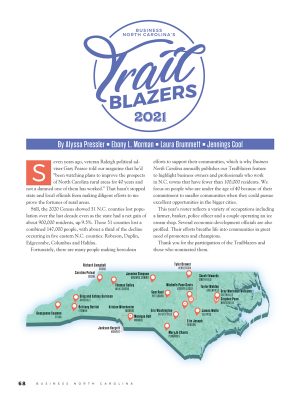 View the 2021 Trailblazers here or click on the image above.