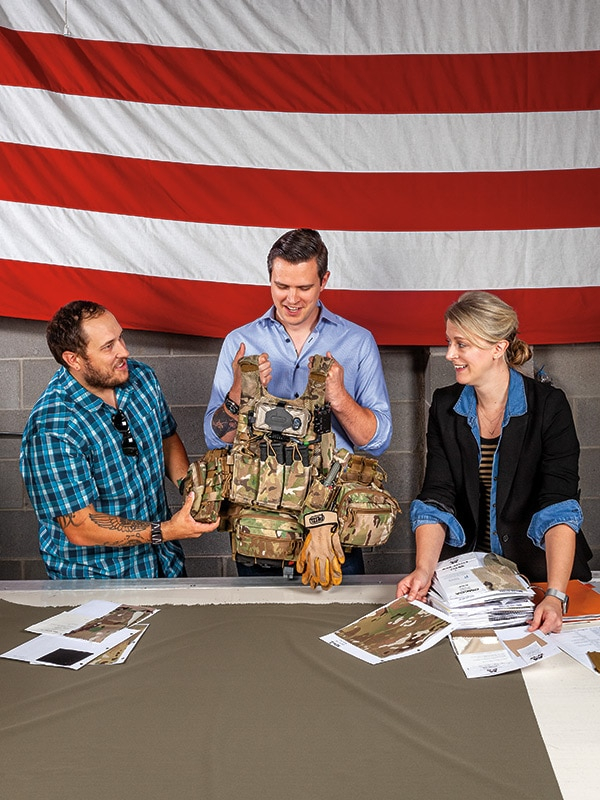 America’s strategy for war has changed. Before 9/11, volunteers would serve as soldiers, the U.S. would supplement its forces with a draft and soldiers would deploy for a year before their service was up. But America’s wars in the Middle East have spanned nearly two decades. The forces are composed entirely of volunteers, now dubbed professional soldiers, who may spend years overseas deployed on multiple tours. While America’s standard-issue military gear ranks among the best in the world, it hasn’t been updated to adapt to the longer deployments in combat zones, where equipment tends to deteriorate or malfunction.

Aberdeen’s Spiritus Systems, founded by lifelong friends Zane Vogel and Adam and Nichole Holroyd, is combating those issues by creating improved nylon tactical gear for law enforcement and military personnel.The three grew up in Rapid City, S.D., then reunited in North Carolina, where Vogel was stationed with the 82nd Airborne Division and the Holroyds had relocated for a job opportunity for Nichole at the local hospital.

Vogel and Adam Holroyd came up with the idea for Spiritus Systems while both were on tour in Afghanistan in 2014. Dissatisfied with their gear, they often modified equipment to fit their personal needs. Adam, by then a civilian, later started creating gear in his attic at his home in Aberdeen, using an old sewing machine he bought on Craigslist.

“The parts creation, that’s just all based on experience,” Adam says. “Those things we knew we had trouble with or things that we modified ourselves, we just started translating that into the products.”

Using American-made components in their products to comply with a federal law requiring the military to use domestic products, the trio scored with their flagship product, a tactical vest called the Micro Fight Chest Rig. “We just wanted to address one problem that we had, and it turns out that was a problem that a lot of people were facing,” Vogel says. “We’d build them from hand and we’d get them up for sale on the website and sell out immediately.” Now their website features more than 70 different products and they sell thousands of units annually.

In 2017, Spiritus leased its first manufacturing site in Aberdeen. The next year, the company tripled its production space. It declines to disclose the size of its staff.

A majority of the growth has come from direct sales to soldiers, while the company is  expanding its government contracting. “If it’s good enough for that soldier to spend his E1 payment on, they’re going to be thrilled when they get it issued,” Vogel says. “If we market it toward the person we design it for… that’s the product we bring in front of the purchasing department.”

But Vogel and the Holroyds see themselves less as a tactical equipment producer and more as a manufacturing company. “We learned very quickly that everyone in the world has good ideas,” Nichole says, “but the people who actually make it happen are the manufacturers — the companies that embrace manufacturing.”

The goal is to “change the narrative to the younger generation to say, ‘This is not a sweatshop. It’s not dangerous conditions,’” Vogel says. The company’s approach “allows the workers to take pride in what they do.”

Spiritus plans to expand its space by 30% this fall, which will increase the company’s production capacity as it expands into other markets, Nichole says.

But the company’s future may include product lines for completely different markets. “With our sewing-manufacturing base, we’re going to start making consumer products that don’t have anything to do with the military,” Nichole says.

“The future is very bright and very broad,” Vogel says.