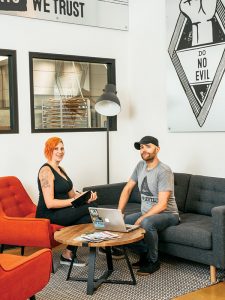 Mike Woliansky and Sadrah Schadel started No Evil Foods based on their passions for healthy eating, environmental sustainability and animal welfare. What began as a simple plan of selling plant-based protein alternatives at local farmers markets quickly transformed into a phenomenon, with their products sold in more than 3,000 stores across the nation and thriving in a multibillion-dollar plant-protein industry.

“We started No Evil Foods very innocently,” Woliansky says. The duo formed their alternative meat company in Weaverville, roughly 10 miles north of Asheville, in 2014, after moving to the area from upstate New York.

The two weren’t happy with the organic options available at different supermarkets, which sparked the idea to do it themselves. While Schadel was raised a vegetarian and worked in restaurant management for top dining locations in Philadelphia and New York, their culinary experience as chefs was limited. Previously, the two were heavily involved in the punk-rock scene; Woliansky played in a number of different rock bands. The music and rockstar attitude was a major inspiration and influence on the company, and it’s still apparent in the brand today.

The husband-wife pairing started out at local farmers markets, selling organic, plant-based dishes aimed at providing the same taste and experience as the meats they emulate. The couple was surprised at the strong demand from a diverse range of customers, laying the seeds for No Evil Foods.

Woliansky and Schadel expanded their business at Blue Ridge Food Ventures, an Asheville-based business incubator, sharing roughly 1,000 square feet of kitchen space with other culinary startups. Consumer response was robust: No Evil Foods’ revenue has more than doubled annually since 2014, including a 250% gain last year.

The number of stores carrying company products has grown from fewer than 200 in January to about 3,000 now, including Walmart Inc., Whole Foods Market Inc. and Ingles Markets Inc. Woliansky expects that number to double by the end of the year. A big part of that is due to No Evil Foods’ May announcement that its products will be available at 1,000 Kroger Co. locations across the U.S.

The company now has about 40 employees, doubling its number of production and administrative positions since last December. It recently purchased a 16,000-square-foot building with 4,000 square feet of production space in Weaverville, at the former site of DVD-maker Arvato Digital Services. It quadrupled the company’s production capacity.

Woliansky credits the growth to customers’ demand for healthier, flavor-filled food options with high levels of protein and clean ingredients from sustainable sources.

Producing one calorie of animal protein requires 11 times as much fossil fuel as producing a calorie of plant protein, with half of global greenhouse gas emissions due to livestock and their byproducts. “We’re offering this great combination of simple ingredients and that really great meat experience. We’re giving consumers something different,” Woliansky says.

No Evil Foods hit the market at the right time, with plant-based protein becoming a national craze and a jewel of Wall Street. Analysts at JPMorgan Chase & Co. predict the plant meat alternatives industry will reach $100 billion value over the next 15 years. In May, El Segundo, Calif.-based Beyond Meat Inc. went public for $25 per share; it was trading around $162 in mid-August with a market value of $9.9 billion. Unlike No Evil Foods, which hasn’t raised outside capital, Beyond Meat received $112 million in backing since 2013, according to the CrunchBase website.

Schadel and Woliansky didn’t expect this much excitement around No Evil Foods. “We had an idea that came out of our own kitchen. We were excited about what we were making, we enjoyed it,” he says. “Friends and family enjoyed it. We wanted to create something that had our voice in it, that was ours. Something we could be passionate about for what it was, in the sense of what the products were, what the mission behind it was.”

Spreading the mission of sustainability and healthier lifestyles is their main focus. “We felt like the more people we reach that are trying our products, the more we’re being successful at our mission.” By advocating for a cleaner environment and improved public health, “as we grow, we have a platform as a company to say something around those issues.”