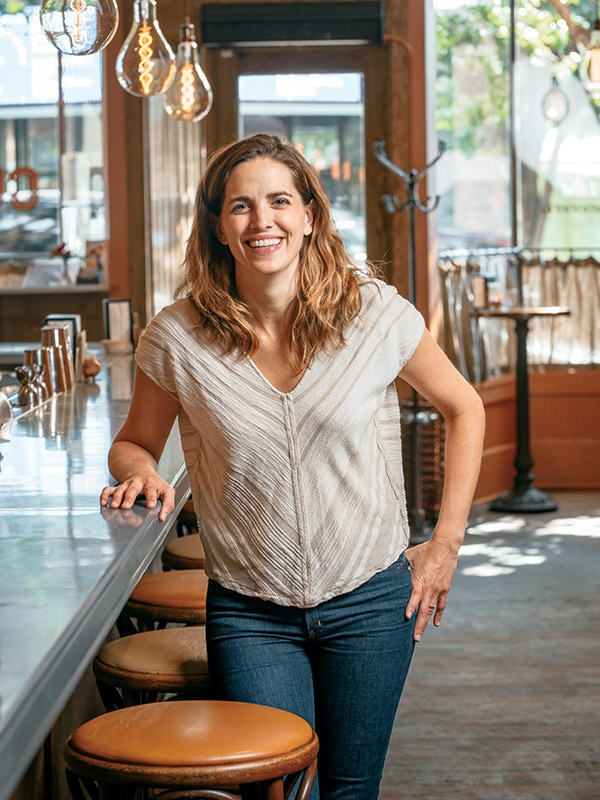 The headquarters of Katie Button Restaurants is perched on the seventh floor of a tower at the heart of Pack Square, overlooking most of downtown Asheville and Katie Button’s two restaurants: Cúrate Tapas Bar and Button & Co. Bagels. In the lobby, a massive frame displays clippings detailing some of Button’s biggest accomplishments: a semi-finalist for the James Beard Rising Star Chef award and for Best Chefs in America, and one of Food & Wine magazine’s Best New Chefs of 2015. There’s a symbolic feeling about her business office being elevated, although the chef herself remains grounded. After all, her life almost took a completely different course.

In her mid-20s, the Conway, S.C., native was set to start a Ph.D. program in Washington, D.C., after earning a bachelor’s degree in chemical engineering from Cornell University and a master’s in biomedical engineering in Paris. But something didn’t feel quite right.

“When I was first thinking about what I wanted to study in school, there’s all these people saying what types of degrees you should get in order to get a job, be successful,” Button says. “To tell you the truth, I was kind of just pushing myself through all these things. I wasn’t super passionate about what I was studying.”

She was cooking as a hobby, a skill she picked up from her mom, who had a home-based catering business. “I had thought, ‘Oh, this is just what life is: You work, and you study something hard, and you grind through it, and you have your hobby that gets you through the grind.’”

Button quit the Ph.D. program and entered the culinary world. But nothing came easy. Without restaurant experience, no one would hire her. “Most people kind of laughed at my resume,” Button chuckles. “It was like, you know, ‘Ph.D. dropout.’ I think I even had my GRE scores on there because I had no professional experience at a restaurant.”

Her break came with a server job at a José Andrés restaurant in Washington, D.C. Andrés is a Spanish-American chef who helped popularize Spanish-style small plates, or tapas, in the U.S. “Once I got my foot in the door, it just rolled from there.”

She went on to work under world-renowned chefs in New York, Los Angeles and Spain, where she lived for nearly two years. With backing from her family and her husband, Félix Meana, an expert in restaurant management and consulting, Button moved to Asheville and opened Cúrate, a Spanish tapas restaurant, on downtown’s Biltmore Avenue in 2011. She was then 28. It has since been named one of the 40 Most Important Restaurants in the Past 40 Years by Food & Wine magazine and as one of America’s 100 Best Wine Restaurants by Wine Enthusiast magazine. Food & Wine noted that Button helped “nudge along the country’s love affair with the once-sleepy town in the Blue Ridge Mountains, which continues to attract the country’s top culinary talent (and the most discerning eaters).”

“There’s something about creating something and then serving it to somebody and seeing their immediate gratification or enjoyment and being a part of that,” she says. “Food brings people together.”

Button’s restaurants, along with many peers, regularly provide family-style meals for hungry locals at the Haywood Street Congregation’s Downtown Welcome Table. The program serves homeless and impoverished people. “I love their approach toward meals,” Button says. “They offer roundtables of family-style plating and real china. You come in, you sit down, and you talk and share with people. It’s not an assembly line cafeteria.”

Button’s latest community food venture is overseeing downtown Asheville’s first annual Chow Chow festival on Sept. 12-15, which will bring together artisans and chefs in a showcase of live music, a makers market, and lots of food and beer.

“Why I ended up living [in Asheville] is because it’s this amazing community of makers: farmers, beekeepers, distillers, brewers, mixologists, chefs, potters, woodworkers, glassblowers,” she says. “We wanted a festival that gave them a platform to share what they do and their story so we could ensure that the growth continues in that same independent, unique craftsman style.”