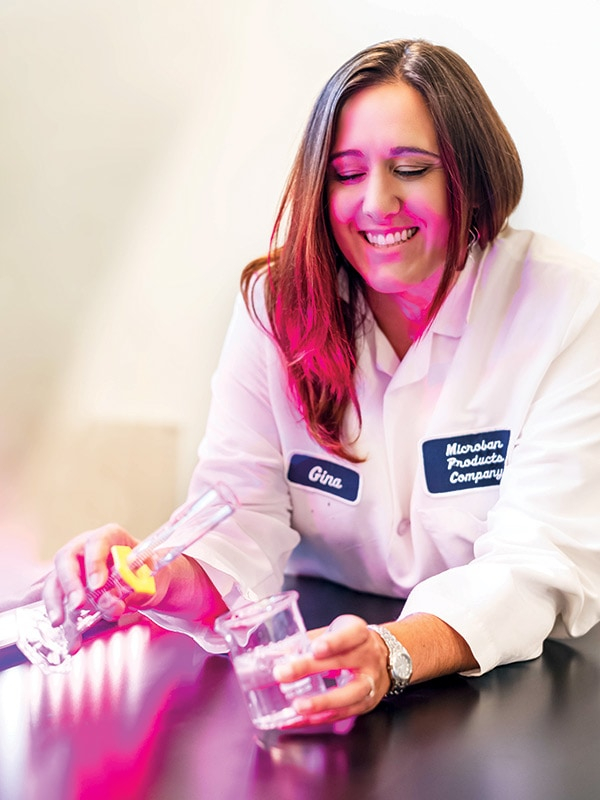 A day in the life of Gina Sloan involves a lot of stinky behavior. The Wake Forest University Ph.D. is the director of innovations at Microban International Inc., a Huntersville-based research organization specializing in odor-control science and creating products that kill bacteria. Sometimes, her expertise requires her and her colleagues to sign up to “be smelly” for a day while the others, well, sniff them.

It’s all to further the odor-control research studied by Sloan’s team at Microban, which was formed in 1984. The odor control arm of Microban focuses specifically on textiles.

When you sweat, Sloan explains, you don’t actually smell until the perspiration interacts with bacteria on your skin and clothes. Athletic apparel companies are particularly interested in controlling these odors.

Sloan’s contributions in textile-odor control earned her a research service award from the American Association of Textile Chemists and Colorists in May. The group sets standards for testing fibers and fabrics for odor control, color fastness and other metrics.

“I was not expecting to be recognized in any way,” says Sloan, who earned a bachelor’s degree in biology at Western Carolina University. “It’s all because of smelling armpits and stinky socks.”

Sloan’s team also works on innovative solutions for antimicrobials, a bacterium that can cause disease or fermentation, and is particularly dangerous in food and health care settings. In June, the innovation team’s first antimicrobial product went to market through Woodcliff Lake, N.J.-based PDI Healthcare Inc., which makes disinfectant wipes. Sloan started working on Sani-24 Germicidal Spray in 2012 to reduce excessive harmful bacteria on surfaces.

“It makes a big difference in food service and health care,” Sloan says. “If you’re in a hospital room and someone had MRSA [a skin infection] in the room before you, you are two times more likely to contract MRSA. The goal with this is to completely eliminate it, and we’re continually running clinicals to be sure it’s true.”

The spray goes deeper than existing brands such as Lysol Disinfectant Spray, which clean surfaces of bacteria until the area is touched again. According to Sloan, Sani-24 should keep surfaces free of bacteria even after they are retouched.

Sani-24 led to the creation of the innovation department at Microban, which is owned by Memphis, Tenn.-based Barr Brands International Inc. Sloan started with the company as a senior scientist about eight years ago, following a postdoctoral fellowship at Wake Forest. After she was promoted to run the microbiology lab, her bosses noticed she was developing a lot of new products and research. Executives then encouraged her to create a position as director of innovation. She’s since built her team to include four others.

Four years later, Sloan says she’s starting to see the fruits of their research. “We’ve created a couple of groundbreaking technologies that are set to launch this year and next year,” she says. “It’s nice to see that four-year march lead to the commercialization of products.”

Sloan can’t be specific about the pending innovation, but she says it is centered on making food service and health care safer. Much of the work involves coordinating testing and compliance with the U.S. Food and Drug Administration, Environmental Protection Agency and Patent and Trademark Office.

Sloan’s passion for science extends beyond her day job. When her two children, ages 7 and 9, started attending the Iredell-Statesville School District, she wanted to get involved. Speaking with teachers, she learned that many limit science studies because of a pressure to focus on the math and reading curriculum — the areas of the most significant statewide testing.

Sloan started working with kindergarten through fifth-grade teachers to create science experiments that kids can perform in school or at home. Through her guidance, young students have learned about sound waves, DNA extraction and other topics. Most recently, she’s been visiting Central Elementary School in Statesville to share her knowledge.

“[Kids] should know that science is everywhere,” Sloan says. “They should understand at an early age that science isn’t this weird, daunting thing. It’s very attainable, and we see it every day, so we shouldn’t be afraid to talk about it and play with it.”