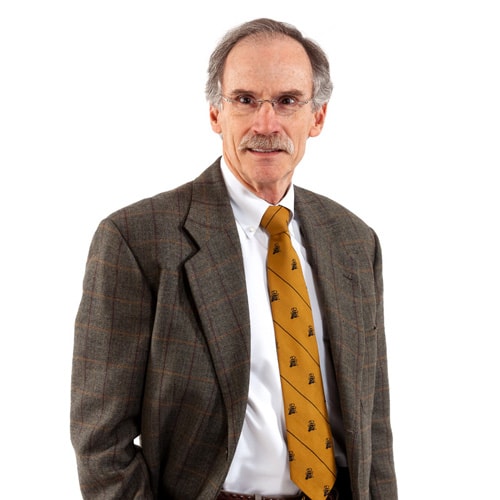 Most memorable case
I was trustee for the Royal Villa Raleigh Hotel, a very large convention hotel. When it shut down, management threw a staff pool party and then fled like roaches when the lights came on, leaving hundreds of banquet tables full of rotting food; moldy desserts on carts shoved into closets; freezers full of food with no power; and filthy sheets on beds in hundreds of rooms. My small law office staff and I spent nights and weekends for a month or two cleaning up the hotel. … I expected a little kid on a tricycle chanting “Redrum” to come peddling around the corner at any moment. We eventually sold the hotel to a megachurch for its full appraised value.

What he’d be if not a lawyer
A full-time student. The syllabus doesn’t matter. I just love to learn — anything! Quarks and leptons today, bricklaying tomorrow.

Favorite place
Historic downtown Charleston, S.C. — my hometown. You could spend a month there and still not take in all it has to offer.

Passions
Piddling around on my piano and guitars and reading anything I can get my hands on.

Favorite book
To Kill a Mockingbird by Harper Lee, perhaps in part due to school board threats to ban it as “immoral literature.”

Music
1966! We had the Beatles, The Rolling Stones, The Beach Boys, Simon & Garfunkel, Four Tops. But in coastal South Carolina, it was beach music — The Tams; Maurice Williams and The Zodiacs; The Drifters; or whatever much less talented local band I was playing in at the time.

Hobbies
All things music. And to this day, I remain always on the lookout for yet another keyboard or guitar acquisition. Additionally, growing up in Charleston meant anything involving water: competitive swimming, lifeguarding, surfing at the Folly Beach Pier, sailing out from Charleston Harbor, water skiing with a flotilla of motorboats down the inland waterway or along the Stono River.