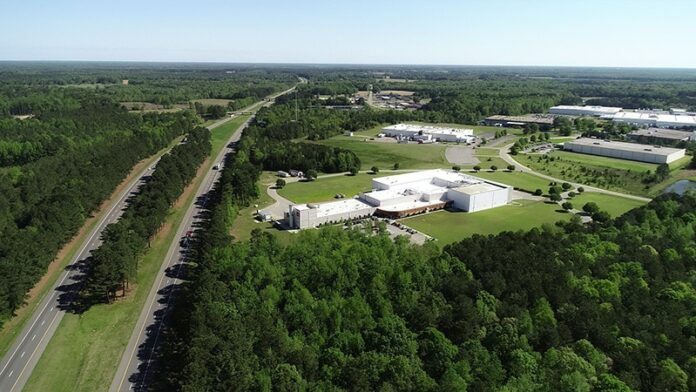 Andy Hagy, Nash County’s new economic developer, has been busy since he was brought in early last year after the county decided to split off from the regional Carolinas Gateway Partnership and launch its own program.

Nash is a big, mostly rural county, 540 square miles of land, and its southern end runs into the state’s most populous county, Wake. In fact, parts of the southwestern edge of the county are just 20 miles or so down the highway from the Raleigh Beltline. Nash hasn‘t seen the kind of explosive growth that Johnston County – another Wake exurb – has experienced, but its population grew by more than 42% from 1980 to 2010.

Nash fared better than some other rural coastal plain counties, but this slowdown gave some urgency to the decision to take control of economic development and hire Hagy. From Hagy’s perspective, he was moving into a good situation. “This is about my fifth program that I’ve started from scratch.”

Nash has good road access in and out. U.S. 64 and 264 – both future interstates – run from Wake County across Nash to Interstate 95 and beyond. Interstate 95 runs north-south through the county, and it shares the Rocky Mount area with Edgecombe County. There’s a lot happening in Rocky Mount, like the CSX Carolina Connector shipping container hub that could open in December.

Nash also controls three business parks, and despite the loss of some textile companies, it has a solid industrial base, with companies such as Pfizer, Cummins and Honeywell Aerospace.

“For new businesses moving in,” says Hagy, “that’s a good, strong point of [things] going well. These guys are here, they’ve been here, they’re profiting. Something must be good here. So, you always flaunt your existing industry.”

He also has tried to let everyone know Nash is open for business. The county has joined the Research Triangle Regional Partnership, a key regional economic development player. He has worked on building relationships at the state level. He has been letting town boards around the county know what he wants to do.

He has ramped up digital marketing to get the word out beyond Nash. The county has an enhanced economic development website, selectnashnc.com, one of the recommendations of a new strategic plan. (The plan, incidentally, was prepared by Economic Leadership, the consulting firm run by Ted Abernathy, who was the economic developer for Durham and Orange counties and executive vice president of the RTRP.)

All this is a playbook from Hagy’s nearly four decades in economic development and commercial real estate.

He grew up in the coalfields of Southwest Virginia, went to Virginia Commonwealth University, and then was hired in his mid-20s to return to his home Buchanan County as county administrator. He arrived shortly before the 1977 floods that devastated Appalachia. He spent six years running the Southwest Virginia office for the late U.S. Sen. John Warner, ran economic development for Spotsylvania County outside Fredericksburg, Va., and then went to work for Virginia’s business recruiter, the Virginia Economic Development Partnership. He also ran his own consulting firm. His most recent job was heading economic development for three West Virginia counties on the Virginia border.

Hagy landed one lead after Universal Leaf announced earlier this year that it was closing down a food manufacturing facility in Nashville. Johnny Barnes, president of Barnes Farming & Farm Pak, the nation’s top sweet potato producer, based in nearby Spring Hope, contacted the new economic developer. He had seen Hagy’s name in an article about the plant closing.

Barnes sells sweet potatoes to a Canadian company, the Crump Group, that makes pet treats. He suggested that Hagy call the Crumps – Joe and Margot, a husband-and wife-team who started their business in their Ontario garage – and see if they might be interested in the Universal plant.

“So, I got the name and number and called them up. Called Joe Crump, the president,” says Hagy. They were interested. They needed to see what the plant looked like, so Crumpler and another staffer went to the facility, “and he took like a thousand pictures and video.” They emailed the massive file to the Crumps. “We kept sending them information.”

Visits followed, and Hagy brought in the state for incentives and workforce assistance and arranged meetings with county officials for local incentives.

In August, Crump announced it would move into the empty building, invest more than $13 million and hire 160 employees. Which is a reminder that local companies often have a wide set of connections and can be a good source of ideas on who might be looking to expand.

Hagy has another solid prospect, a company looking to move into the 340-acre business park in Middlesex, a small town in southern Nash off U.S. 264. Right now, there’s a 62,500-square-foot shell building under contract by a Raleigh-based company. “We’re going to make an announcement, first week of November.”

“So that’s pretty exciting,” says Hagy, “because I think their locating there and the coverage it’s going to get [will get noticed] hopefully by more businesses in the Raleigh area that need expanding.”

Adjacent to the park is a piece of land he envisions could be developed into a life science campus. He wants to go after companies that “don’t want to be right in the hustle bustle … they want to be a little far out but in a nice, well-designed campus. And that’s when the housing developments start going up. Then they could be within a mile drive of a beautiful life science center.”

And, like I said, just 20 miles from the Raleigh Beltline.