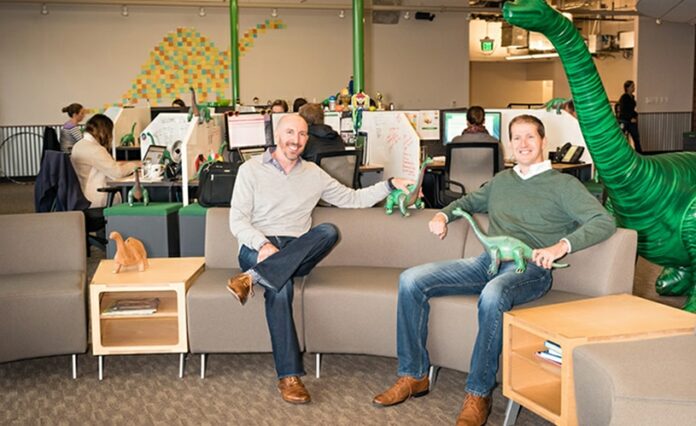 Joe Colopy knew it would be difficult. His wife was six months pregnant, and she was about to become the family’s sole breadwinner as he launched a new company with little prospect for a paycheck anytime soon. Chaz Felix had fewer complications — single, no kid on the way, no mortgage — but he shared Colopy’s dream to turn an idea into a successful business. Almost 13 years after the pair met over beers at a Durham pub and agreed to put $5,000 each into their venture, they sold email marketing company Bronto Software Inc. in April to San Mateo, Calif.-based NetSuite Inc. for $200 million — the fifth-largest deal for a North Carolina tech company in the last decade, according to the Durham-based Council for Entrepreneurial Development.

Many entrepreneurs make the same leap of faith, and innumerable North Carolina tech startups have been acquired or gone public over the years. What separates Bronto is that Colopy and Felix never took outside capital to start the company or finance its growth, so they didn’t have to share the sales proceeds. The result was a return on investment of almost 2 million percent. Why play the tortoise and not the hare in the race to grow? “We didn’t see enough benefit from it,” Colopy says.

The emphasis on thrift started at Bronto’s inception. After earning an MBA at UNC Chapel Hill’s Kenan-Flagler Business School in 1999, Colopy began tinkering with an online database app, teaching himself how to code. He and his wife, previously living in Ecuador, had chosen Durham in the mid-1990s after pulling out a U.S. map and blindly pointing to central North Carolina. In 2000, Colopy left a marketing job at Raleigh-based software developer Red Hat Inc., which went public the previous year. “I wanted an entrepreneurial life rather than a corporate life,” he says. Though he had no plan, “I knew I would figure something out.”

Felix has business-oriented genes — his parents published a food-safety newsletter from the family’s home in northern Virginia — and he worked as an investment banker for Bank of America Corp. While studying for his MBA at Kenan-Flagler, he put together a business plan for an online chat room, overlaid with a search engine. The venture didn’t survive the dot-com collapse of 1999-2001, and Felix moved to Red Hat to work on special projects. After the company posted a poor quarter, Felix lost his job. “It was shocking when I was laid off,” he says, “but it really shaped my path forward.”

Although the duo worked at Red Hat at different times, the company facilitated their first meeting — Felix pitched his business plan to Colopy and other so-called “hatters” while searching for venture capital — and one of its former senior executives had a role in Bronto’s eventual sale. Likewise, they attended Kenan-Flagler at different times but chatted after Colopy (class of 1999) spoke on an alumni panel to students including Felix (class of 2001). “We both connected,” Felix says. “He could sense entrepreneurship on my side, and he was very interested in that.” After Felix was laid off, Colopy gave him a call, and Bronto was born.

Colopy had already chosen BrontoMail as the name of the business, having pared down his app to an email program. “I didn’t want a tech name or a generic brand,” he says. He also had a childhood fascination with dinosaurs. “It needed personality.” The business also needed money, with much of its $10,000 grubstake spent on used desks, a computer and an inflatable dinosaur to attract attention at trade shows. It didn’t have a rent expense, because they worked from Colopy’s Durham home.

Even if they’d wanted venture capital in 2002, it would have been a difficult task with tech companies reeling after the bubble burst. Colopy and Felix scrimped as they refined the product and scrapped for customers. Felix took in a roommate and began a steady diet of ramen noodles and spaghetti “to lower my burn rate.” Colopy relied on his wife’s salary as an environmental researcher with Constella Group in Durham. Still, he notes the couple had more money than when he was a Peace Corps volunteer in Seychelles, an African island-nation, or working as an English teacher in Ecuador. “Everything is relative,” he says. “It’s all about expectations. Living below your means is key.”

That became Bronto’s mantra. The company bartered the email program for ad space in local tech publications to attract initial customers. Colopy and Felix printed business cards only after contacts asked for one. After moving out of Colopy’s house, where a crying baby made it hard to conduct business, they took space in a now-defunct tech incubator in a $100-a-month office with a phone that could dial out but not receive calls. “We were pragmatic. Less is more,” Felix says. “It was about rolling up our sleeves.”

Success with local customers led to regional and eventually national ones as Bronto shifted from an email management system to a cloud-based platform that enables retailers to expand and improve their online marketing. Sales soared from $17,000 in 2002 to $1.5 million three years later, when Colopy and Felix started drawing modest salaries. They still skimped on expenses, signing off on each new hire. “It instilled a level of discipline,” Colopy says. “It’s akin to raising your kids to be grateful and hardworking versus being spoiled.”

With paying customers such as Armani Exchange and Samsonite sending out more than 20 billion emails through Bronto, venture capitalists started circling. The leaders took a pass. Outside money could have led to hiring more experienced employees, but Bronto was “more focused on serving customers, and the revenue followed from that,” Colopy says. It had $40 million in sales last year.

Bootstrapping a tech startup often involves balancing management’s ability to expand at a desired rate against loss of some control to outside investors, who can rev growth but inevitably want to sell the business, says Jay Bigelow, director of entrepreneurship for the Council for Entrepreneurial Development. “The fundamental question companies ask is, ‘Can I get where I want to be faster with outside capital?’” he says. “But you really need someone who brings more than a checkbook.”

The match with NetSuite benefits both sides, according to the Bronto founders. The California firm provides cloud-based business management software but needed a marketing-oriented product. “It was less a hole in our offerings than we saw the direction the industry was going,” says Andy Lloyd, general manager of e-commerce products for NetSuite. Board member Kevin Thompson, a former chief financial officer at Red Hat, introduced company executives to Colopy and Felix in 2013, and the two sides began discussing ways to work together. The following year, they began talking about a deal.

Bronto wasn’t for sale, Colopy and Felix say, but $200 million and the chance to make an impact at a $6.7 billion company changed their minds. They retained their Bronto titles, chief executive officer and chief operating officer, respectively. “I want Bronto to play on the largest stage possible,” Colopy says. Felix adds, “We can tap into their footprint to take Bronto global. To own the commerce space, we need to do more than Bronto can do alone.”

Getting Bronto to its size at the time of the sale, with 260 employees, without outside investment is a testament to its leaders, Bigelow says. “They’re the exception rather than the rule.” Google, Apple and other tech giants throw a ton of resources at attractive niches, making it difficult for the Brontos of the world to compete on their own. For Colopy, 43, and Felix, 42, it was a matter of sticking to their plan and going out on their own terms. “I don’t want to just be climbing a ladder,” Colopy says. “I want to determine what the ladder is.”

The building process doesn’t have to be hard